Will Rogers, Tulsa and Beyond

Today started with a good look at the calendar. Tomorrow, Saturday marks the 11th of the 22 days we actually have touring, so it is the chronological midpoint. Adrian Texas is the mileage midpoint of route 66 and is 3/4 of the way across the state. Tonight we’re at an Econo-Lodge in Chandler, OK. We expect to be close to the Texas border by tomorrow night putting us close to 2 days behind balancing time and mileage. We are making some slight adjustments in shopping habits and do expect the attraction density to drop off as we cross New Mexico and Arizona but that’s just my guess. At this point neither of us have any major stops we have our hearts set on and that alone will move things along. In any case the side-trips are definitely out as we focus on the mission.

Today’s water was reasonably soft and the motel breakfast was a tad above average. I slept like a log until the sun streaming through a curtain gap woke me like a stick in the eye. I got up too late to see those nifty dump trucks in the daylight.

Before leaving this morning we took time to sort and pack the accumulation of souvenirs. The 29 pound box was dropped at the post office and is on its way.

The big event today was visiting the Will Rogers Memorial Museum in Claremore. 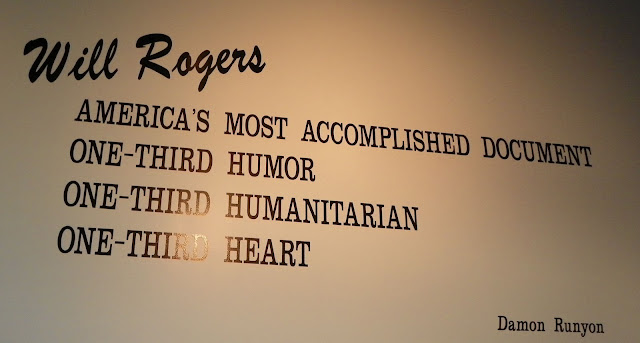 I have been fond of Will since seeing James Whitmore perform his one man show, Will Roger’s U.S.A. I still remember seeing it air on CBS when it aired in 1972. Latter I got a recording of the show. It’s among 2 spoken word pieces that have been very influential to me. 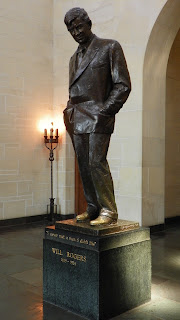 The museum was interesting portraying the many aspects of the man with paintings, portraits, memorabilia as well as audio and video. We spent close to 2 hours touring the museum, the gift shop and out on the grounds. I found a T shirt that struck a chord and brought one with me. 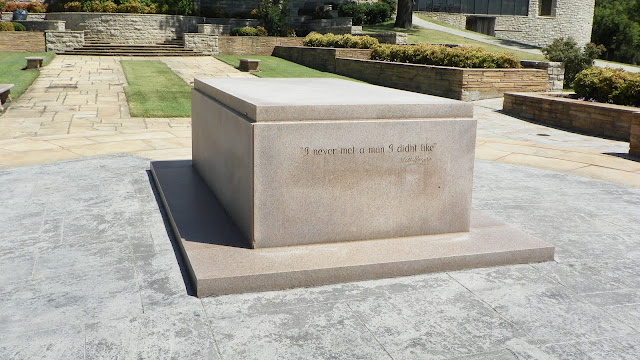 After the museum we tanked up at $324.9. That’s about 40 cents less than the going rate at home when we left.

From Claremore we traveled to Verdigris to find some bridges. The first is a picturesque railroad through truss bridge that includes elevated trestles at each end as it spans the valley. It spans the McClellan-Kerr navigation system, an extensive inland waterway. 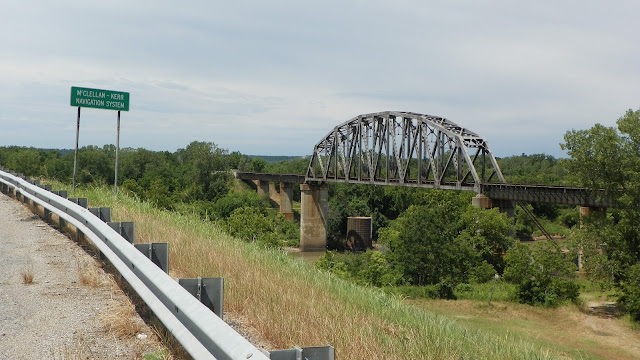 Next down the road we went to see the Twin Bridges each having 3 through truss pans and a pony truss span at each end for a total of 5 spans. One from 1936 was built 24 feet wide and dates to the opening of route 66. The second is 28 feet wide and was built in 1957 when the route was converted to the divided 4 lane configuration that this segment continues to operate in. 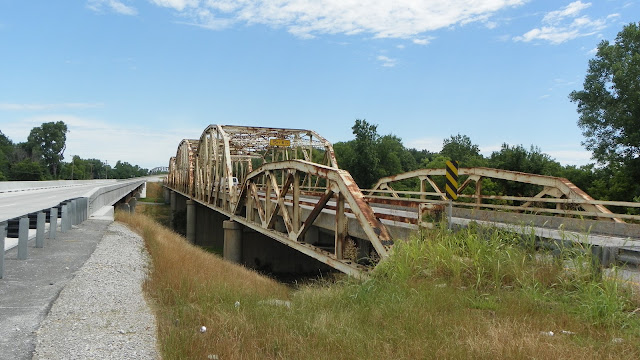 When we got there we found that the 1936 span had been replaced with a modern bridge, the concrete still snowy white. While photographing the remaining span we noticed some bridge spans up on a hill which seemed odd. 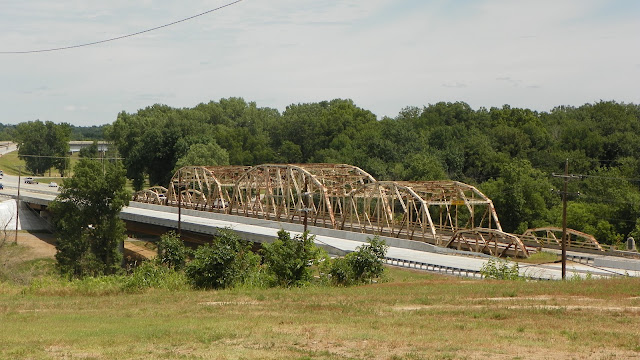 When we got there we found that one truss span and a pony span from the 1936 bridge had been integrated into the driveway leading to Molly’s Landing, a local restaurant. The cement curbs and asphalt paving formed the driveway with the bridge sections defining the space and adding some drama to your arrival. All together it’s pretty dramatic and it’s eye catching from down on the highway. 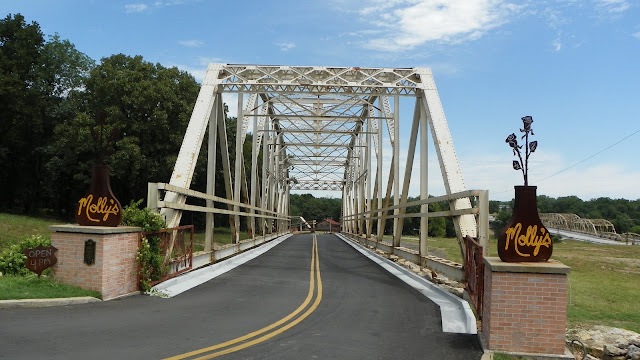 One thing we have noticed is that many of the bridges are sized to accommodate much more water than normally flows. On a given day a significant bridge may allow for the passing of a mere brook. Even around towns it’s not uncommon to see box culverts sometimes in tandem sitting dry just waiting for a deluge.

The other infrastructure oddity is the use of utility paths behind main streets. The downtowns don’t have any overhead utility wires, the building utilities are all out back. We have noticed this in a number of towns including Miami and Bristow. 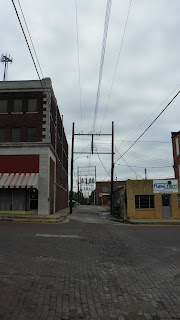 From there it was down to Catoosa to check out the Blue Whale which is a chicken wire and concrete structure and acts as a fishing pier. The chin is on shore and you walk in through the open mouth. The rest of the body is open with railing height sides. 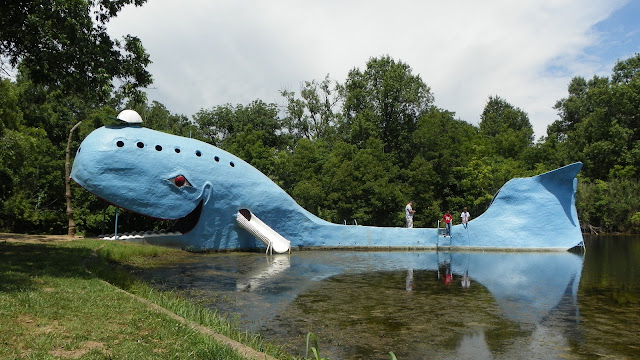 Originally Hugh Davis built it as an anniversary gift for his wife. The park surrounding it was a popular swimming hole for a while.

While there we met up with Hugh’s some Wayne who showed us the dilapidated Noah’s Ark concession stand and some other stands that predated the whale. He still has dreams of bringing the whole place back to life. For now the Blue Whale has become an institution with a number of locals assisting with the upkeep. This year he is sporting a nice fresh coat of blue paint. 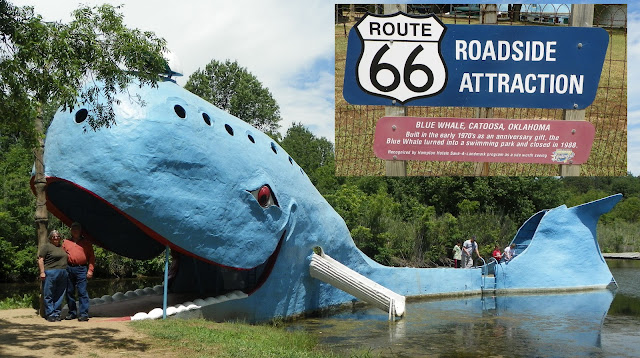 Catoosa also gave us Lil Abner’s Dairyette. The place is closed but not grossly dilapidated and could make a comeback.

By early afternoon we made it into Tulsa, home of the Brookshire Motel, still in operation. The Oasis Motel still offers lodging and the nice sign is said to look really good with the neon glowing. 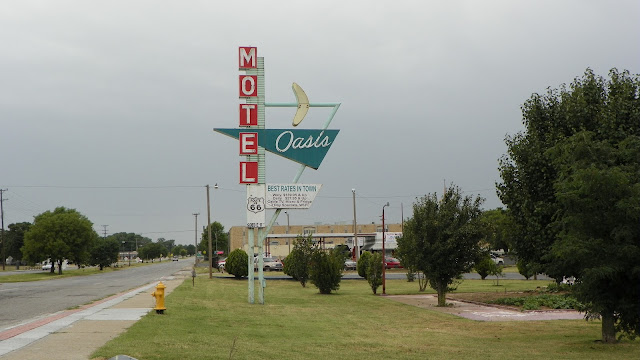 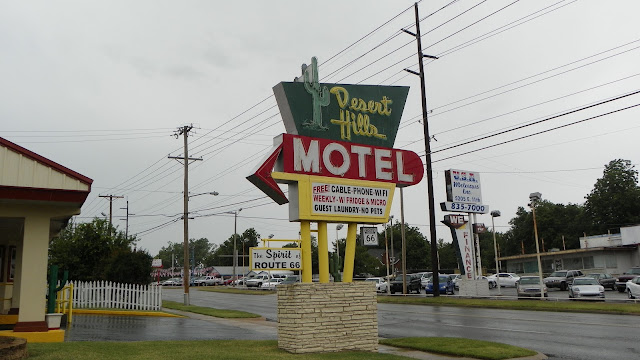 The Desert Hills Motel has a nice sign and fence mural. The Circle Theater looks really nice with a huge neon sign and red and white marquis. We found a beautiful Cities Service (became CITGO) station that has been repurposed. The white enamel with green trim and lettering looked very clean. The remains of the Bell motel with vertical sign included a neat long mural wall. We found signs for the Midway Trailer Court and C.J.’s Café.

The Rose Bowl is a mesh of giant dome structures that form a large function space. 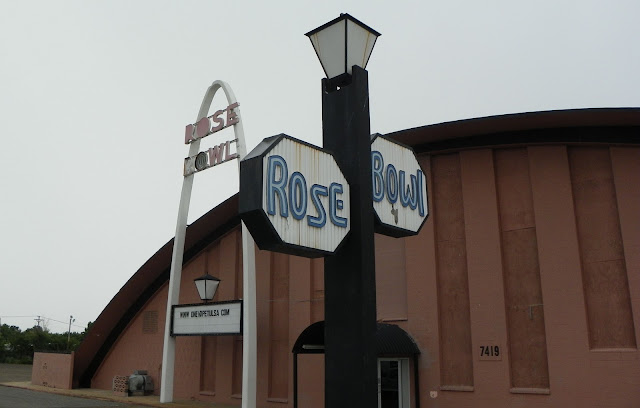 Built in 1960 the bubble gum pink building offered bowling in some of the space. Football and more recently concerts have been played in the 2 and one half dome facility. It has been refurbished after a 2005 interior fire. We got some good pictures as drizzle settled in for the afternoon. 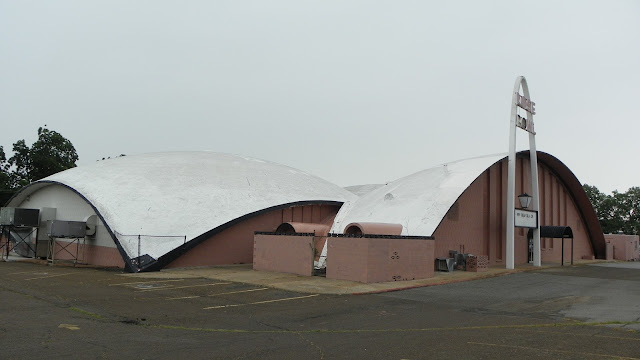 We stopped at Tally’s Good Food Café in Tulsa for lunch. With neon inside and out this place felt like it had a lot of weary traveler stories it could tell. 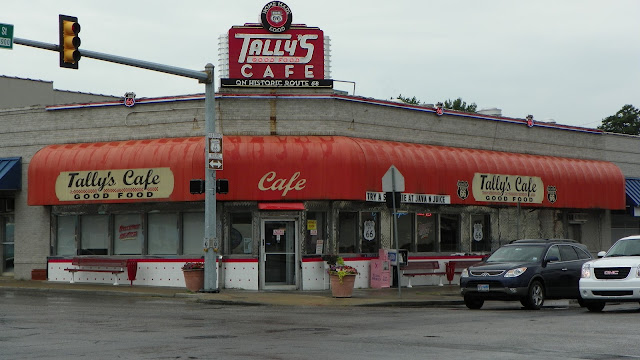 Though it’s only 25 years old the counter stools and booths give it that real deal feel. Lorna’s turkey club and my buffalo chicken wrap were generous, affordable and good. 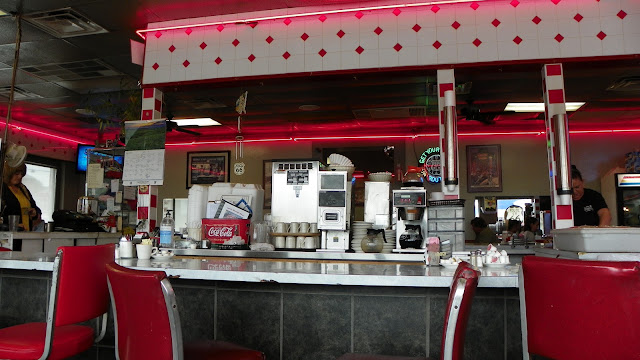 The Dairy Freeze up the street is gone and the property re-used. The auto resale company kept the giant ice cream cone on the sign.

The Cony I-Lander hot dog emporium was a real dated looking place with good traffic. The standard dog included chili which we tried but a bite a piece was enough. The actual hot dog seemed very nice in a steamed Cony Island roll but the overall flavor just didn’t work for us. We came, we tried we learned.

Tulsa was one of those places where we saw a lot more than we could capture. Between traffic and the rain many places like the  1920's blue dome filling station now the hub of an entire nightlife district cam home a drive by memories. Leaving the city we passed under a modern footbridge that was decked out with a spiffy ROUTE 66 shield. 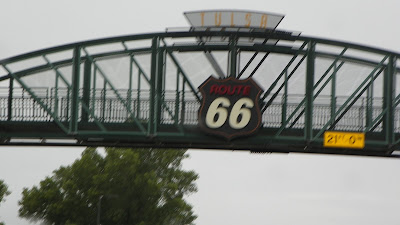 We caught the sign at Ollies Station Restaurant in Red Fork. We had no plausible reason to go inside.

Sappula was our next stop where we saw the “giant” Coke bottle and cup. 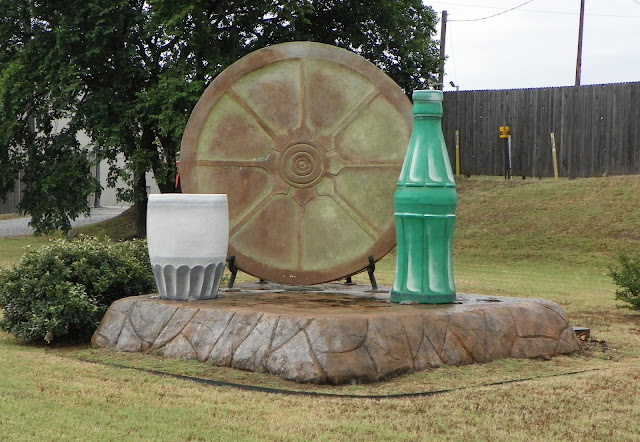 Afterwards we found Happy Burger, a genuine old school burger stand. Rick ran out to greet us and offered to take pictures of us with his sign. I felt really bad that we weren’t up to a taste but lunch had been filling.

In Kellyville we took an old alignment that brought us up to some abandoned oil well equipment in fields. We are into oil country and road side wells are not that uncommon.

On an older alignment in Bellvue we found an old stone motel that had a garage between every unit. The stonework was still looking very nice. This now stood on the property of a private residence.

We had hopes of making the suburbs of Oklahoma city tonight but it was in Bristow that the plan fell apart. We found a nice old tile roof brick station that was restored as part of Bristow Tire and Auto. 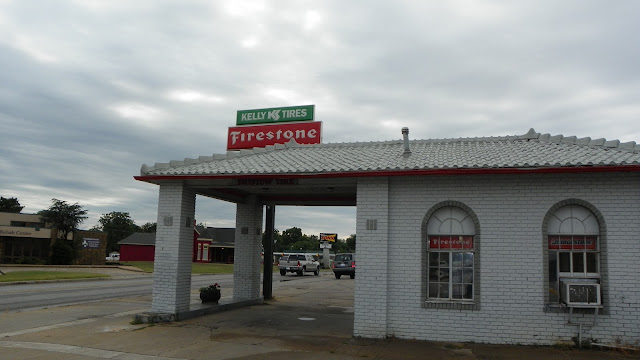 While taking pictures Bill, a local stopped by and we started to talk. A local claim to fame is Gene Autrey. One of his early jobs was working a few blocks away at the newly restored train station, now museum that now includes an exhibit about him. 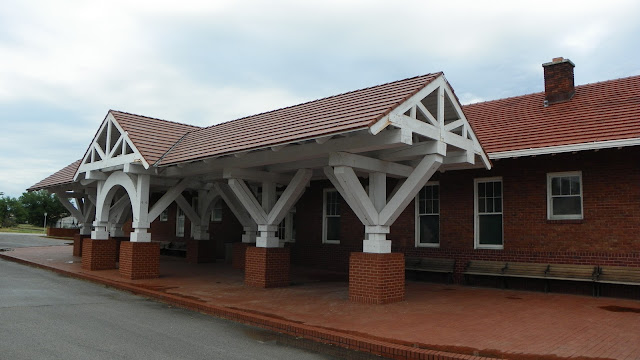 Also, If we went a few blocks we’d find the old Roland Hotel  where he cut his teeth in broadcasting, how can you pass up such an opportunity? I learned that Lorna couldn’t. 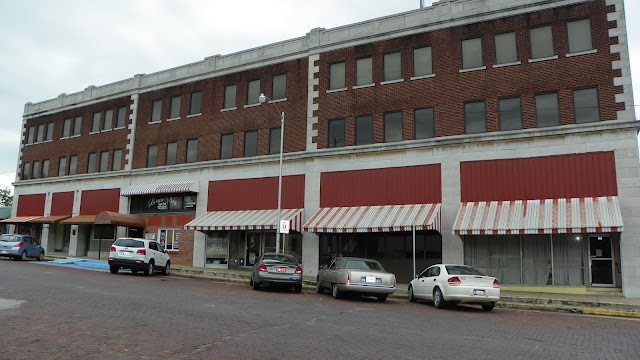 Finding the 2 landmarks went well and yielded some nice pictures. Before leaving we had to meet the giant purple penguin at the Crown dealership of Bristow. 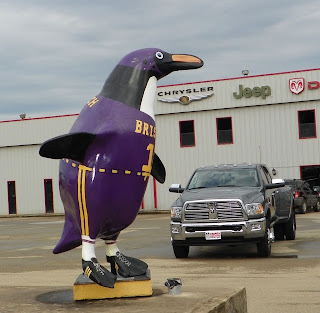 Depew village is up on an alternate alignment loop. Up on the hill it is bypassed by most. This village is largely abandoned with a few places still making a go of it. A few newer murals grace the town. 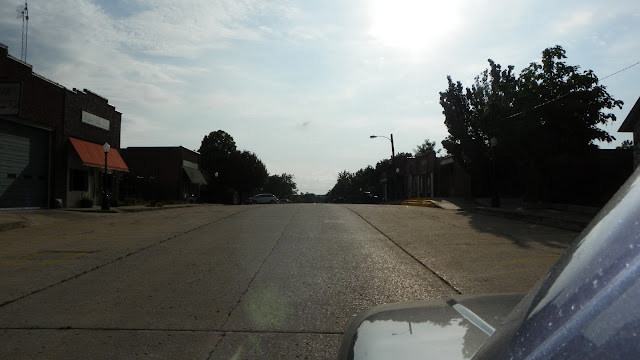 In Stroud we found the Shoe Tree on an old alignment. It’s a bushy sort of stout tree with lots of shoes tossed over branches. Sponsored by the Shoe Tree Trading Post next door it was quite an oddity. The Skyliner and Sooner Motels were both looking good. 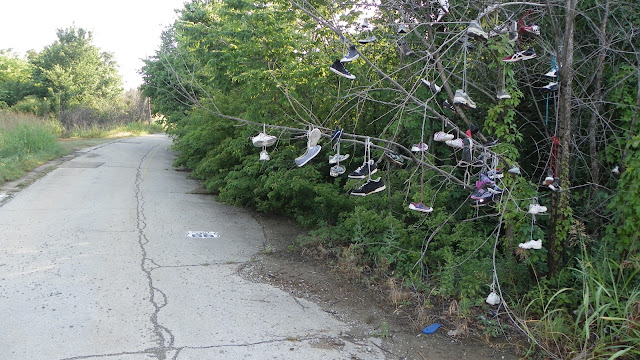 In Davenport we passed Gar Wolley’s, Food & Fun. It had a decent crowd . Around the corner we located a nice welcome mural.

Finally in Chandler we spotted the Lincoln Motel looking good. We ended up at an EconoLodge. It included "B's Restaurant" featuring the Best Steaks in Oklahoma, Lorna agreed.

We’re settled in for the night, the blog is done and I should be hitting the hay by 1:00 AM. We still have just over half the trip ahead of us and it’s more fun every day. I don’t know if it’s us or the different people of the regions but they are increasingly more talkative and that sharing of information. This is really adding a lot to this experience.
Posted by Pete at 10:46 PM