And Away we go to ChiTown


Well it’s Tuesday morning and I have some catching up to do. Sunday was a busy day battening down the hatches at home, making our list and checking it twice and of course packing. That went well into the night that ended all too soon when the alarm went off to get ready to head out. It’s a good thing I don’t need to fly the plane. Lorna’s folks were over at daybreak and got us to the airport, THANKS!

Air travel was about as good as it gets with flights and baggage all being where they needed to be right on time. During our Charlotte layover I rediscovered Carolina Pit Barbecue good stuff! I found this place a few years ago when a chain of cancelled and redirected flights put me and a coworker in Charlotte at about 10PM with no dinner. The food was just as good without the acute hunger and fatigue. 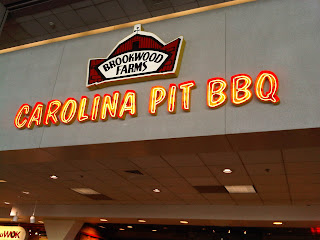 We were on the ground in Chicago early in the afternoon and headed over to get the rental car. We snagged a Jeep Liberty from the Emerald Aisle. It’s big enough, better on fuel than the behemoth I was considering and high enough see the sights. Maybe we can kick up some desert dunes?

With the GPS plastered to the windshield we naively headed for the hotel. It seemed that a number of desired highway ramps were closed for repair or accidents. The GPS figured I was numb and wanted to go around the block a few times. Did I mention that short night’s sleep? After breaking the cycle a few times only to be thwarted by another closed ramp I drove out far enough that it chose a different and more cooperative route to the hotel.

The streets of Chicago are surprisingly tree lined. Enough so that it's easy to miss a smallish hotel on the first pass. What's one more trip around the block. :) Dealing with an in-town hotel with no onsite parking was something new to me. We pull into one of several spots up front and an attendant helps unload the bags and a valet drives off with my vehicle. There’s something about not having a vehicle at hand that leaves me feeling a little lost and helpless. We checked in, collected the box of maps and tour guide books we sent in advance to avoid baggage weight and headed up to our room to settle in. Those maps would have been handy when playing ramp roulette. Note to self, bring the local maps next time!

It was getting to be late in the afternoon and we knew we wouldn’t be up for a big evening. We hiked down to Navy Pier on the shore of Lake Michigan. It was relatively quiet being a Monday evening in May but there was plenty to see. It was Lorna’s first time there. One surprise was an endless gallery of stained glass windows. All framed, shielded and back-lit. 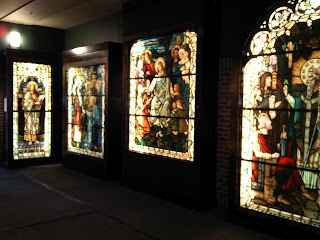 After a day of air travel it felt good to just do some walking and sightseeing. We had a light dinner at Harry Caray’s and headed back. We found a 7-Eleven near the hotel for a few refreshments and headed in for the night.

After writing a version of this post that got eaten by the “back” button, dozing on some TV we crashed for the night. We’re on vacation!

No time to mess with pictures this morning but some will follow.
Posted by Pete at 5:39 AM