The day started in Springfield, IL with a visit to the Abraham Lincoln, Presidential Museum. 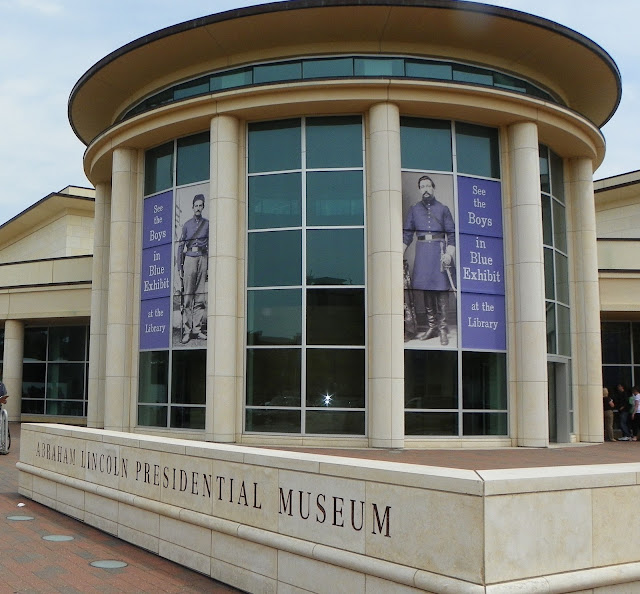 School trip season is in full swing though many schools are already shutting down for the summer. Even though it’s not a route 66 attraction it seemed like a good thing to do while we were here. The museum is not at all what I expected there being none of the classic museum type exhibits. The central hall is surrounded by 4 Lincoln exhibit spaces and a rotating exhibit room. We began with a walk through exhibit of the young Lincoln’s life prior to the White House. It was a series or rooms and vignettes, self-guided with limited descriptive plaques. From there we went to see a presentation of the Ghosts of the museum. This was an innovative show with one live actor. The audience is seated on simple wooden benches that span the auditorium for the 12 minute show. The stage is behind a wall of glass and is a broad library space. All of the sounds and voices are prerecorded with the actor miming. Some holographic projections are used to make other story elements come alive. It was engaging and patriotic with a run time of about 12 minutes. Next was a walk through of rooms and vignettes featuring the presidential years, including the assassination. The first room was a TV studio control room where contemporary election night coverage was enacted by Tim Russert. It was  a good way to communicate many details. The last feature was a movie in a more classic theater room. Multiple screens were used on 3 faces of the room to tell the story including a projected host. It was a Sensurround presentation titled “Lincolns eyes” and it told the story of the war and Lincolns time in the White house. Smoke, smell and jolting vibrations added realism.  With a trip though the gift shop it was a 3 hour excursion.

Next stop was down the road, still in Springfield at the Cozy Drive in, “Home of the Famous Hot Dog on a Stick. The corn breading was just thick enough with a rich corn flavor and a nice significant crust. The hand cut shoestring fries were also good. The place was doing a brisk business in busy town. The place was full of memorabilia and I sprung for a T Shirt. 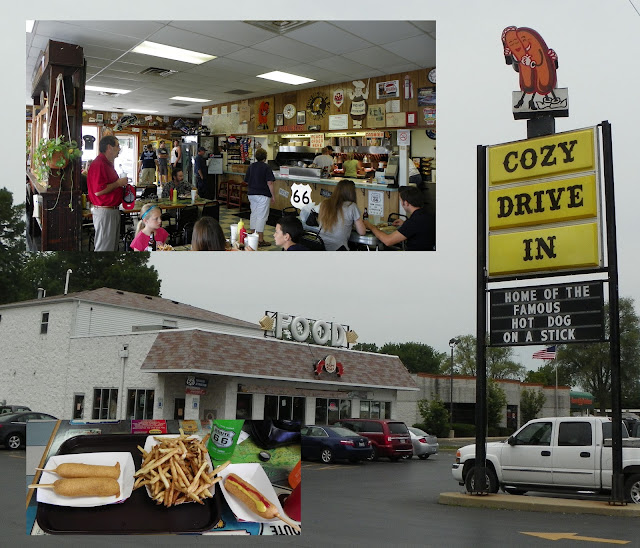 Across town we then visited Shea’s filling station museum. $3.00 per head bought a personally guided tour from one of the family members. 4 generations work the place including the 90+ year old grandfather. We had the place to ourselves for about an hour passing another arriving couple as we left. Some days they arrive by the busloads. The family has been there running service stations on route 66 since 1966. In addition to the main station they had a small tin station that had been moved to the site. The place is filled with memorabilia beyond description, signs, uniforms, product, pumps, tools, souvenir items and family history. He must have shown us dozens of examples of the operation being featured in travel guides found around the world. American pickers came to shoot a segment but a snowstorm caused them to scratch the shoot They promise to return. The grandfather even autographed postcards for us, real nice folk. The place isn’t fancy, but it’s a roadside institution. 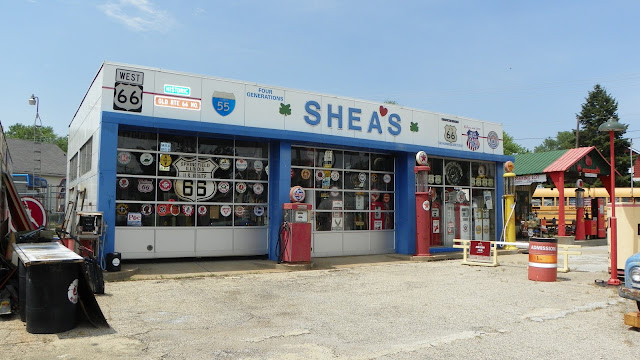 The afternoon was growing late and it was time for desert. We stopped at Steak & Shake for milkshakes. Little did we know it was happy hour (2-4 PM) with shakes ½ price, what a deal. Across the street was another giant Paul Bunyan, this time holding an American flag.

From here we left the primary route and traveled the 1926-30 alignment of the road. Over the years segments were changed as things evolved and this road has not officially been Route 66 since 1930. Our first stop was in Auburn, a 1.4 mile section of the roadway in its red brick form. We put the camera timer to work and got a picture of us on the red brick road. 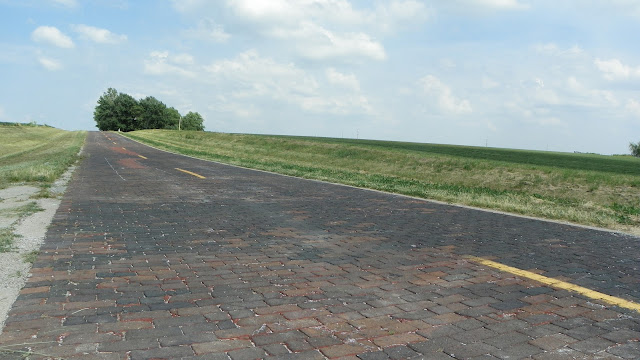 Down the road in Virden we visited the monument of the Virden Mine Battle of 1898. The battle is still considered a landmark event in American labor history. The massive plaque and bricks commemorating those lost and involved. Sit in the central lawn park.  Once again the village was clustered around a big grassy park and a hardware store was especially photo worthy. The veterans were selling memorial day poppy’s as a toll as we entered town. The park has a nice veterans statue up on an uncommon white 4 legged pedestal that you can walk under. 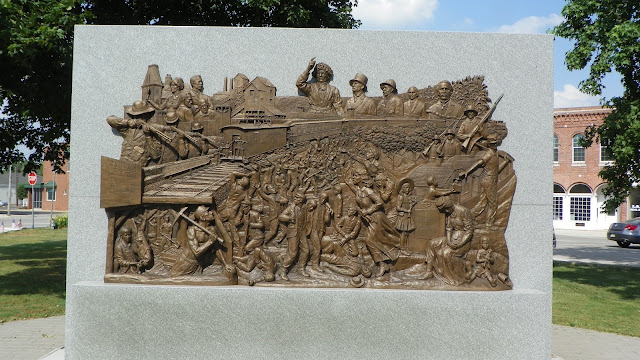 I think this is where some alternate route markings threw us a curve ball.  Many of these roads are small and remote so anything is plausible. In this case we were way out in the farm fields. At one point at a crossroads with corn fields running almost as far as one can see on all four corners. Finally Lorna though of sending the GPS to our next destination and it led us back to civilization.

As we moved to the next stop the GPS flagged an upcoming attraction. Nestled behind a present day filling station in Farmersville we found Art’s Motel & Restaurant. The place is shut down and resting in the shadows of highway billboards. It had been refurbished and reopened in 2006 but apparently did not make it. It’s down on the sparsely traveled Mother Road on the fringe of Farmersville, a virtual ghost town.

In Waggoner we visited Our Lady of the Highway. Since 1959 this small shrine to Mary has put a religious spin on highway safety. As you drive south from the shrine you can say your Hail Mary one phrase at a time as you read from the roadside signs in the Burma Shave style. This site like many is in the Route 66 Hall of Fame.

Carlinville had the Macoupin County “Million Dollar” courthouse. The reported price in 1870 is a scandal that lives to this day. The massive Renaissance Revival limestone structure is the largest courthouse in the nation. Age has taken its toll on the exterior staircases so they are all closed. A modern side entrance is used to access the building. 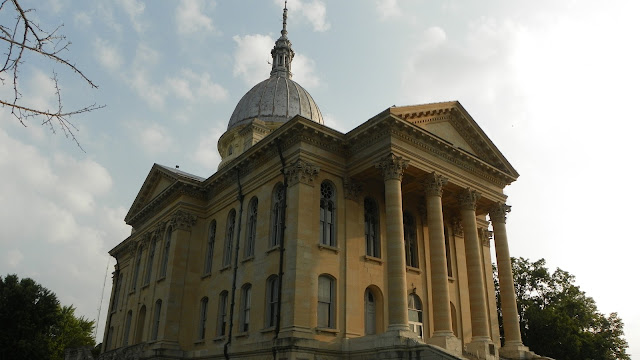 Visible across the street is the 1870 county jail, built in Gothic Revival style. Cannon balls are embedded in the walls to help prevent jailbreaks. The town center looks like a big roundabout on the GPS. As we approach, a square grassy center lawn space is surrounded by  a massive red brick square tarmac that is rimmed with the village shops. Traffic enters on the 4 sides and encircles the lawn. There are no markings, you just wing it. The farming community character was evident when we stopped for gasoline. In one direction was the main street with the courthouse dome in the background. When I turned around the grain elevator was the dominant feature.

“Buffalo Bill Rangers Ranch” in Gillespie had been a roadside attraction featuring buffalo. Apparently it is no more since “In Memory of” has been added to the sign. There is still a pen with a few buffalo grazing apparently maintained by the present property owners. Across town we found dinner before finding a room at the Super 8 in Staunton. A nice clean room, with continental breakfast for $58. ! 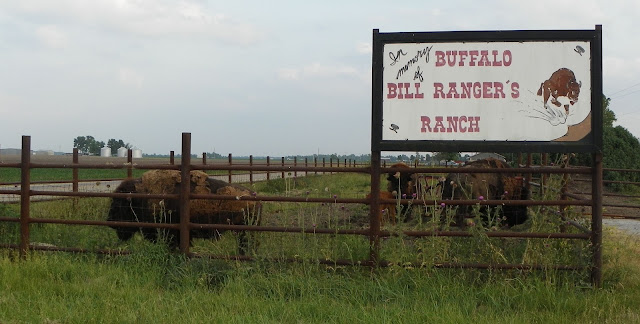 The farm fields have been consistently active. Meanwhile the villages continue to be quite depressed, some were literal ghost towns. My guess is that modern farming machinery is enabling the farming to take place with many fewer workers. No workers, no local economy and the village collapses.

We thought we’d be in St. Louis tonight but Illinois has had many stories to tell. We should wrap it up and be in Missouri in time for late lunch. We continue to locate more maps and guides. No single resource has it all so we’re juggling lots of information to chart the course.

In addition to the stops mentioned there have been many buildings that were certainly part of the route 66 story. With the route now established as a National Scenic Byway perhaps others will be restored to their classic configuration and join in the telling of this story.
Posted by Pete at 5:16 AM