A morning with no alarm clock, what a treat. The hotel breakfast room was plenty good, including those make ‘em yourself waffles.

With that it was off to the Field Museum of Natural History. They have the biggest most complete T-Rex in the business. She’s named Sue and Lorna wanted to meet her. They actually have a massive “evolution” exhibit that we must have been an hour walking and reading through and it had slew of prehistoric critters. We also got to see a 3D movie about Sue, “Waking the T.Rex”. Then we saw special exhibits on Genghis Khan and The Underground Adventure. All told we were there for about 5 hours. 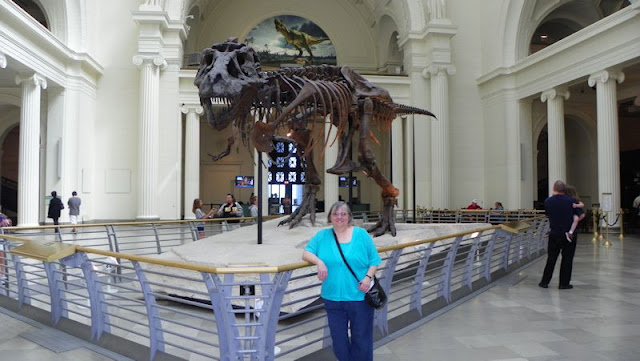 From there it was off to the Willis Tower (formerly Sears Tower) SkyDeck to see the big view from the 103rd floor. It’s odd walking near Lake Michigan with a good breeze and realizing there isn’t salt in the air. It was about a 2 mile walk along the lake front then to Grant Park and taking in Buckingham Fountain. We hit it right and got there while it was shooting high. Route has Grant park as an origin so it’s of significance. 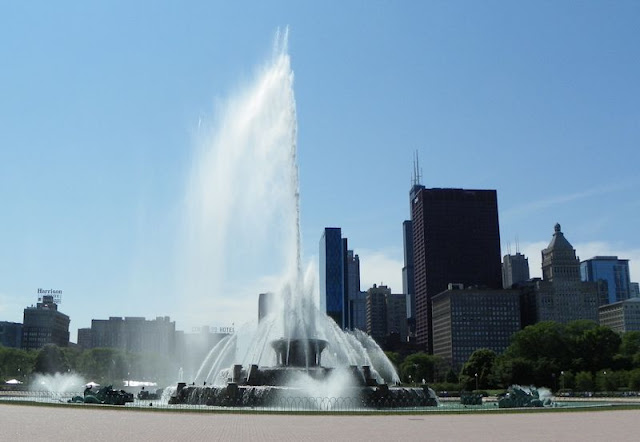 On the way we noticed a big honking building with some very ornate roof ornaments. It ended up being the Chicago Public Library. We decided to check it out (no pun intended) and got to ride the escalators and see an insane amount of marble. The magnitude of these public spaces is really grand. 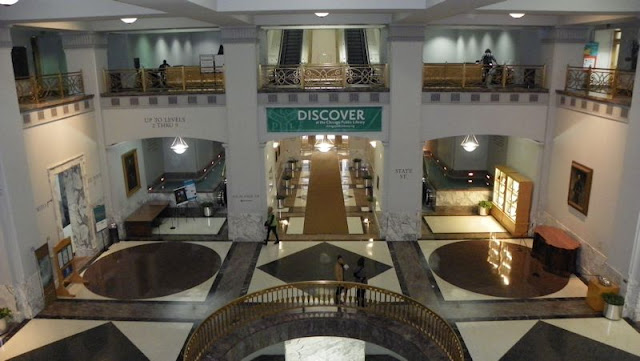 We got to the Willis tower and the light crowd made it all a breeze. They meter the traffic to the SkyDeck, posted at 300 Max. They get their money’s worth out of the elevator trip packing people like sardines in a can. The overview of the city was cool and we got some pictures. Some of the architecture was actually neat to see from that vantage point. Some teachers that bring classes every year said it was the best visibility they ever saw so we did OK. 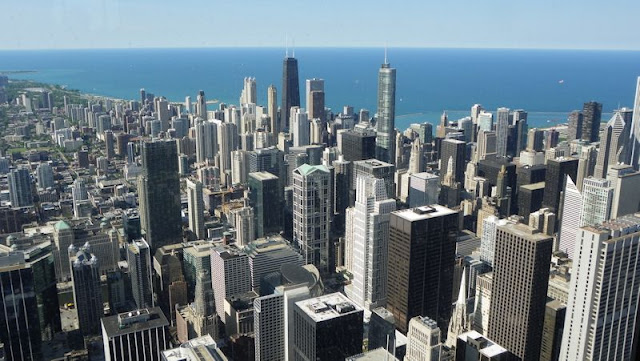 From there we needed to get to dinner and drop off the camera before the concert. We decided to log some more miles walking and armed with our map headed home. Walking along we spotted out first “Illinois Historic Route 66” sign” that was worth a photo. Time was slipping away and the likelihood of a nice sit down meal was fading fast. If it wasn’t going to be leisurely then it need to at least be interesting. I had been hearing about “Italian Beef” and after noticing a few such places there was Al’s, Chicago’s #1 Italian Beef since 1938. It must have been the one at 169 W. Ontario. We each had the signature sandwich with the 4 inch version being plenty. The finely shaved beef was mouthwatering tender, well spiced and juicy. The fries were also darned good. They were the kind with the peel. 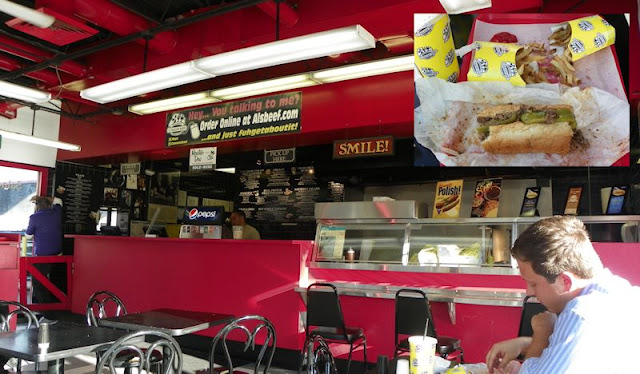 We walked on after that but finally snagged a cab as insurance against time or a wrong turn. By then we had logged most of that 2 mile hike. I think the cabbie took the long way so I wouldn’t feel like a dork for getting a cab so close to the destination. It was a fun ride as always.  After a quick turnaround at the hotel the doorman flagged a cab and it was off to the evening show.

After going to the Beach Boy’s 50th anniversary concert 9 days ago and toughly enjoying it the coincidence that they were playing tonight, 6 blocks away was irresistible. A few minutes on stub hub landed a pair of nice balcony aisle seats near center stage. (section  BALC3R Row J, Seats 304 & 306). The show was at the majestic Chicago Theatre which by itself was worth the price of admission. Forgive the smart phone pictures but they have this thing about cameras at concerts. :) This was shot after the concert at the bottom of the balcony. 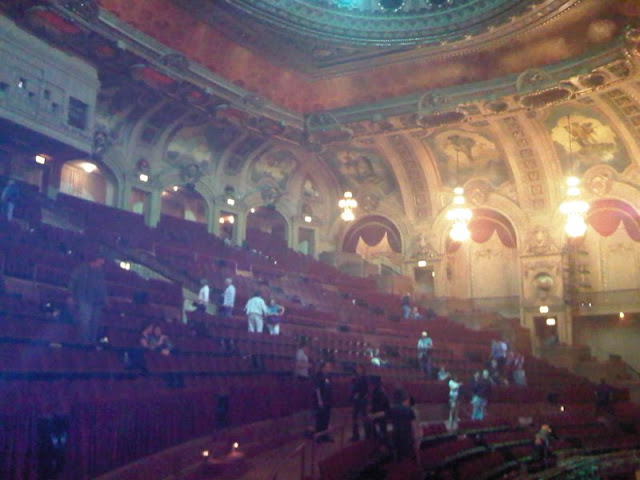 When the cab dropped us off about 45 minutes before show time the initial crowd had dispersed and we breezed right in. This was my first time with stub hub and while I had heard good things you just never know. 2 beeps from the scanner and in we were. Sigh.

The seats were exactly as expected and we got to feast our eyes on the eye candy this place is festooned with. We got to compare notes with a few other fans that have been following Brian Wilson over the years. His work consistently means so much to so many people. From what I could see it was a full house on the second night of a 2 night stand.

When the usher came to us asking to see our tickets my first thought was that I had been taken on Stub Hub. Quite the contrary, I sat in row I rather than J and just need to move up a seat, whew.

If you do a little people watching you can often spot which half of the couple is the real fan and who is along for the ride. In our case I’m the fan but Lorna has really come around. A few neighbors were disturbingly chatty but were generally drowned out and settled down as the night went on. It’s also clear that Kokomo, done for the movie Cocktails is known to a different generation. When that comes up a whole different crowd perks up to sing along.
The show was very much like what we saw at Mohegan though I swear they may have added 1 or 2 more obscure numbers. I’ll need to check the set list when it gets posted. With about 44 songs in the show it’s a tough call from memory.
Thinking back over the years to memorable concert experiences one stands out from the Peter Paul and Mary 25th anniversary concert at the Civic Center in Portland. At one point while singing Puff the Magic Dragon they stopped singing and let the audience carry the vocals. The sound of some 6000 people singing with the innocence of youth was breathtaking. It’s on the live recording of the tour but being there brings it to a whole other level. Tonight approached zenith when the audience began to eclipse the amplified Beach Boy’s singing Wouldn’t It Be Nice.

Latter in the show Dennis and Carl Wilson were remembered as the live band accompanied them as video and vocals played. Dennis did “Forever” and Carl did “God Only Knows”. A standing ovation followed.
California Girls caught me off guard when the mention of the “midwest farmers daughter” got a rise from the crowd. At home it’s the “east coast girls” that gets a response.

Brian was in the best form I have seen him in so far. He carried all of his vocals and remained engaged throughout the whole show. At time he was animated gesturing to the crowd and band. When he got up from the piano for the encore and went to playing bass guitar he was nearly dancing.

I have to mention the band. In addition to the 5 actual Beach Boy’s 10 other musicians shared the stage. The band is largely Brian’s touring band that has worked with him for over a decade. They are an incredible group of multi-instumentalists and angelic singers. They have brought Brian’s solo tours and recordings to life. (Pet Sounds, Smile, Lucky Old Sun, Gershwin & Disney) Sir Paul McCartney calls them the best touring band in the world! Reading the history of these musicians including the founders of the Wondermints they love and respect the work of Brian Wilson. Of special note is Jeffrey Foskett. Jeff shares the front of the stage with the Beach Boy’s adjacent to Brain. Has the talent of being able to perfectly emulate the soaring falsetto of a young Brian Wilson. He has been playing this part for many years and acts as an extension of Brian, filling in when needed and letting Brian be the star. Every fan in the know understands what this man means to the show and for all intents and purposes he is the 6th Beach Boy.

I have said this before and it bears repeating. They play on the Bangor waterfront on June 22 and if you are so inclined, be there!

Just when you figured that all of the hits had been played the encore ended with “Fun, Fun, Fun”. The night ended with the audience once again eclipsing the bad with the falsetto wailing that defies the written word.
And with that we took our time leaving the theater as the roadies began their nights work. We hailed a cab with “Fun Fun Fun” still ringing in our ears. And that’s just what this adventure is about. 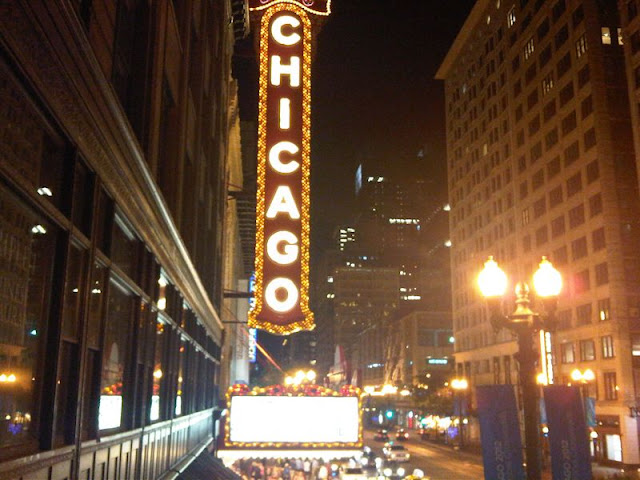