Deep in the Land of Lincoln

The day began in Dwight, IL at a local 50's themed diner sort of place. Last evening we realized there was more to see in Dwight so it was back to the village.

For a little village it has some grand buildings. The former Keeley institute now the Fox Developmental Center has multiple columned facades and with multiple buildings it covers a good part of the block. In the room above the main lobby are 5 stained windows depicting the 5 senses. Stained glass panels also adorn the ceiling. The room and much of the interior that we could see was trimmed in green marble columns. Another centerpiece is the restored and operating railway station.

We circled back to the restored filling station to get a recording of the 3 minute audio presentation that played when you press a button. We first heard this voice in Gardner. The speaker has a warm pleasant voice that makes you want to drown yourself in a tub of Country-time Lemonade. Despite the odd metaphor this is a positive statement.

As we drove south we could see a wind farm to the east with at least one hundred and perhaps hundreds of wind mills. To get some pictures I crossed the railroad track on foot and there was nothing in sight down the long straight away. Before I knew it the crossing was clanging and an Amtrak train came ripping through, it was flying!

Our next stop was Odell home of a restored 1932 Standard Oil filling station. The white and blue paint really popped in the morning light. Inside were a lot of related antiquities and a gift shop. 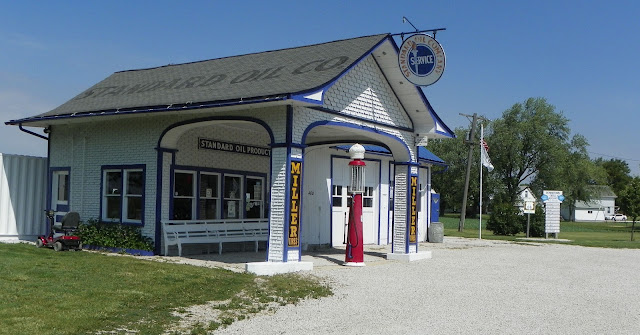 Another interesting find was waiting back up the street at the Catholic Church. The route 66 traffic was often bumper to bumper and moving fast. For the safety of children and all citizens a tunnel was constructed to cross under the street. A stairway running parallel to the street went down then walkers turned to cross the street to exit up similar staircase. It has all been filled in however the staircases remain and one has been partially excavated to illustrate this piece of history. Another one is said to have existed farther up the street.
One thing we are noticing is that many villages have wide grass spaces between street and sidewalks. Broad common green spaces up the center on “Main Street” are also common. Sadly many downtown's seem to be nearly ghost towns with 1/3 occupied, 1/3 for rent and 1/3 derelict. 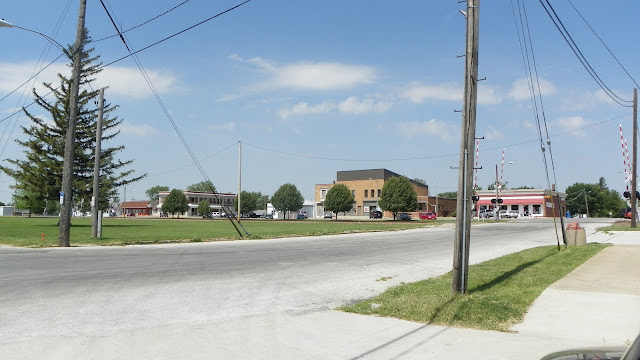 Today we spent the lion’s share of the day driving on route 66 as a 2 lane road, no shoulders. Lanes were of moderate width and pavement old but comfortable enough at 50 MPH.  Major crosswinds from the east were blowing. Much of the time we had 2 retired lanes visible across a median ditch. In a lot of areas we were parallel with railway track and/or an interstate highway. Sometimes the panoramic views of trailer trucks on the highways gave a real sense of commerce on the move. We are also seeing a real pattern of grain elevators and community silos, they mark nearly any significant location.

It’s early to say for sure but we both came to the realization that we may want to sacrifice some of the side trips (Grand Canyon, Hoover Dam, Vegas, etc.) so we can do justice to route 66. It’s early to say for sure. We are really getting connected to the legend of the road and enjoy wandering a few blocks past the through road. Also we have already found a number of locations exceeding the expectations that our research set.

Late morning brought us to Pontiac, IL, home of an Illinois route 66 museum.  We could have spent a full day in this town. The downstairs of the old town hall has been re-purposed and includes a huge display of memorabilia. Most of it organized town by town from north to south. It was fun to revisit the places we just toured and to get a glimpse down the road. Then the docent just had to get us up on the story of Bob Waldmire. Bob made it his life’s work to chronicle the Mother Road in sketch and paintings. He traveled the road in a converted school bus and towing a VW micro-bus. Both are on display and she gave us a tour of the bus. She wasn’t done with us yet, pretty amazing for her 2nd day on the job! 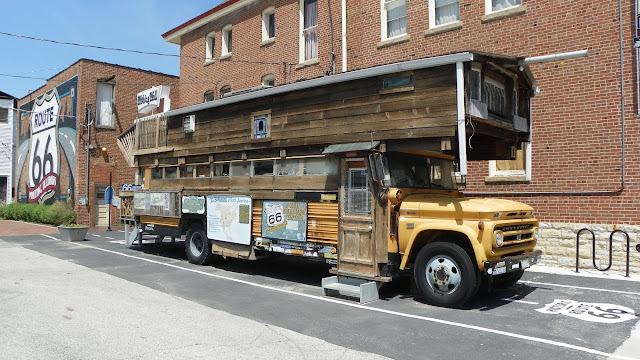 Next she told us about the WALLDOGS. They are an association of independent sign artist that converge on a community for a weekend. They painted something like 23 colorful vintage murals all around town. Just follow the red footsteps. We walked the town snapping pictures of murals.  Additional murals have been added by local artists. We also visited the WALLDOGS gallery/museum that was established.  Just as Joliet had the gas pumps around town here they were small decorated kiddie cars on the sidewalks. After lunch we went back to the museum to tour the 1940’s exhibit and a galley of route 66 iconic photos. 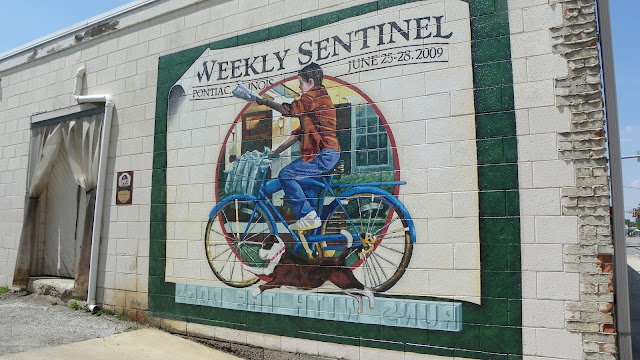 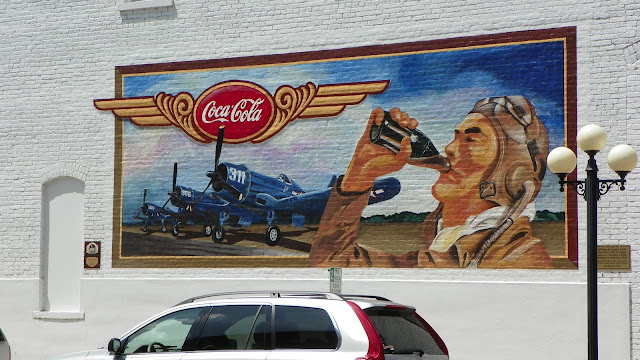 Our next stop was Memory Lane in Lexington. This is a 1 mile section of the original road that is lined with vintage signs to be enjoyed as a walking tour. It was a nice walk but unfortunately few signs remain. They do still maintain the road with mowed shoulders and open it up for special route 66 events. It was a nice walk.

The next stop was Funks Grove where we saw a nice church, transplanted train station (I think) and the remains of the Funks Grove Country Store.

Atlanta, IL was next down the road. We expected this to be a drive by….  Lorna got a kick out of the Laundromat / 50 cent bookstore. Somehow we missed the giant Paul Bunyan statue as we drove in. Here he holds a hot dog in a bun! The town also had a number of new and vintage wall murals. The town library with a free standing clock tower were nice stone structures. 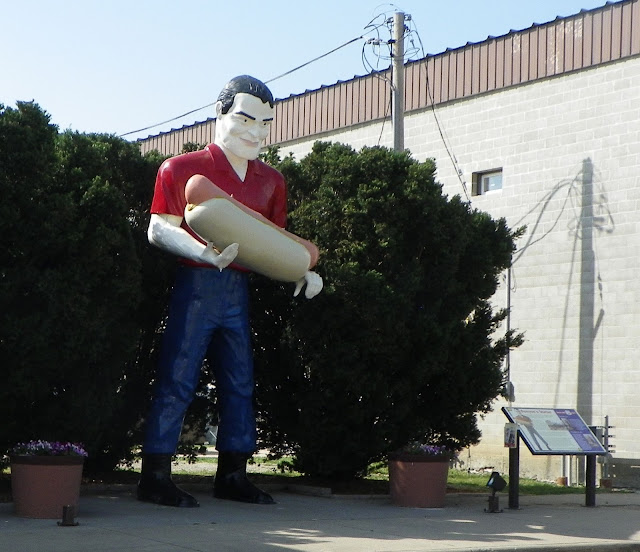 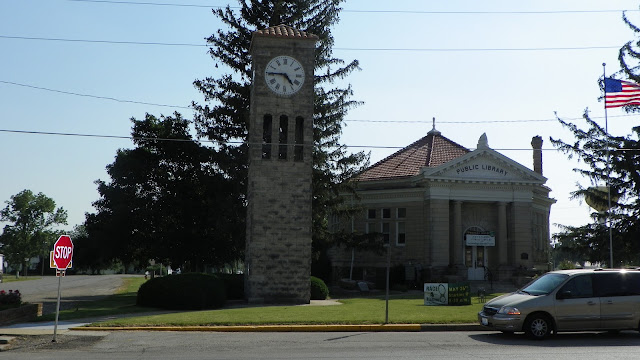 They even have a route 66 park. A mural proclaims it to be the midpoint of Ill route 66. The grain elevators down the street reminds you where you are. The final delight was the yellow mushroom top water tower, complete with a smiley face! Not bad for a drive through town! 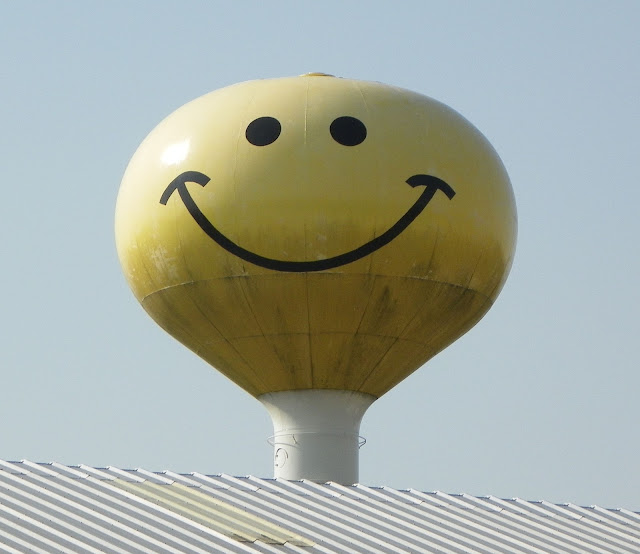 The town of Lincoln sported the world’s largest covered wagon and Honest Abe is the driver! 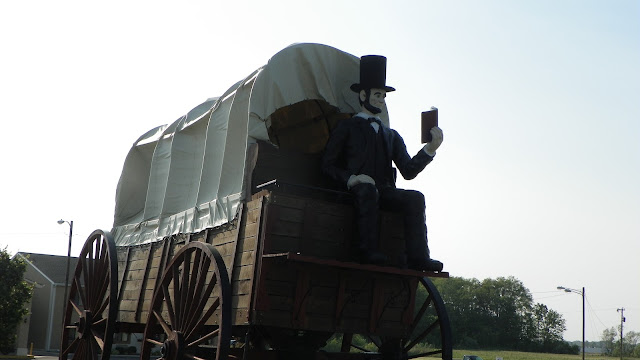 The Pig Hip restaurant, a legend and dinner plan was not to be found. When I checked tonight it had burned down years ago.

Williamsville is where we found dinner. Bella Trattoria was the happening place. One guy was running the whole front of the house, hours 5-9. The stone baked meaty pizza was satisfying. The Main street like many others was a mixed bag but looked rich in history. They had a real nice center green a few blocks in. It’s fronted by a big arch leading to a cannon and veterans park. The Farmers Coop grain elevators were expansive. There was a Route 66 used car dealership with no cars but lots of eclectic stuff. 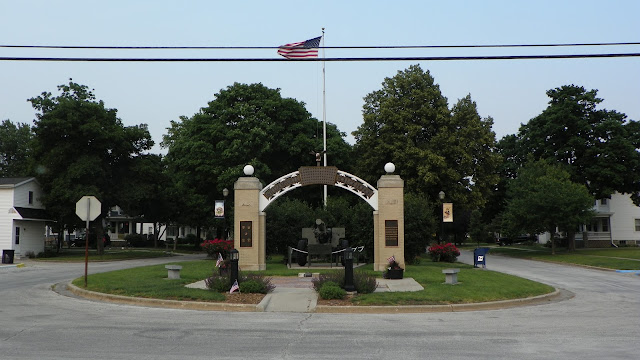 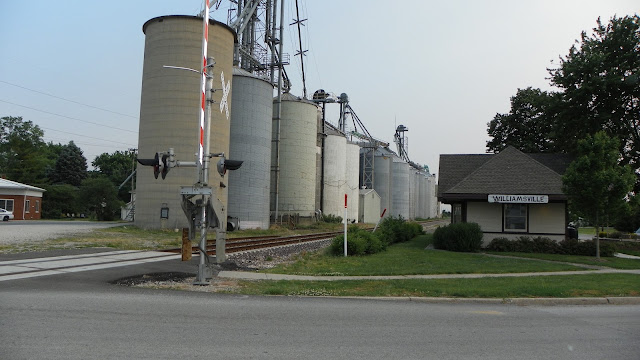 From there it was time to find a room. The Frontier Inn was supposed to be the quintessential route 66 motel. It was looking like a run down hodge podge. We moved on to Springfield and snagged a room at the Ramada.

It has been another great day. I can say that I have transitioned from feeling like this is just a long weekend to being on vacation. Unlike some recent vacations where we visited familiar favorite places this is all virgin territory and the experience is entirely fresh. In case you haven’t figured it out, I’m writing this blog as a personal keepsake as much as to share the adventure. Tomorrow will begin with the Lincoln Presidential Museum then other attractions here in Springfield and down the road.
Posted by Pete at 9:32 PM