It’s day 6 of the trip we’re really getting into the swing of this. Today brought a number of transitions to the trip. The endless cornfields at times became amber waves of grain. The flat fields became rolling hills, straight roads found some curves and wooded land became the common terrain. At 2:15 this afternoon we crossed the line in to Missouri ending the tour of Illinois in 3-1/2 days apart from the Chicago time.

Speaking of Chicago reminds me of the Beach Boys concert and what we stumbled on. After a few days of local radio we decided to try the Sirius XM satellite radio in the Jeep.  We started with period correct 50’s pop music. After a while we went to 60’s pop where we found them having an Endless Summer Beach Boys weekend. They are playing the live recording done for them by the BB at the onset of the tour. I can really hear how the band has tightened up over the months but it still serves to relive the live performances. The rest of the weekend is about 50% Beach Boys music. They are playing a mix of the big hits and obscurities.

Living in New England we are accustomed to the strata in the rocks being in any orientation due to glacial disruption. Here where rock has been cut away the layers are level. Where we have much granite limestone is common here.

Road kill of deer is quite common, I think we spotted 3 so far. Let it suffice to say that cleanup is not prompt. We also hit a stretch of the St.Luis beltway with a speed limit of 60 MPH, a speed limit I don’t ever remember seeing. Okay, I’m easy to amuse.

With the trivia essay complete it’s time to capture the day’s sights and tastes. I can’t wait to add pictures to this blog but just the text is keeping me up pretty late. So far the photos and a few videos amount to nearly 600 files and 6 gigabyes.

After a Super-8 continental breakfast it was off to Henry’s Rabbit Ranch in Staunton, IL. The outside featured mix of rabbit, route 66 and automotive artifacts. A bunch of VW Rabbit chassis were cut in half and planted in the ground bumpers up, like rows of corn. Now I know where those cars come from. 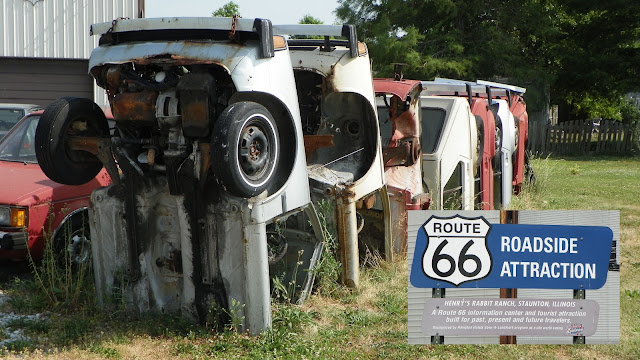 There were old gas pumps and signs from restaurants and motels of the past. I can just picture an older couple stopping in and seeing the sign from a place they visited a generation ago with their family or on a honeymoon. Oh yea, there is a building with cages of BIG rabbits. Lorna took a peek in the door and decided not to raise havoc with our allergies. Other guest were inside checking out the bunny’s and snapping up souvenirs.

Our next stop was in Mt. Olive at the Soulsby Shell station. This was a classic roadside filling station that has been restored and housed vintage exhibits and a few souvenir items. It was built in 1926 and operated by the family until 1991. 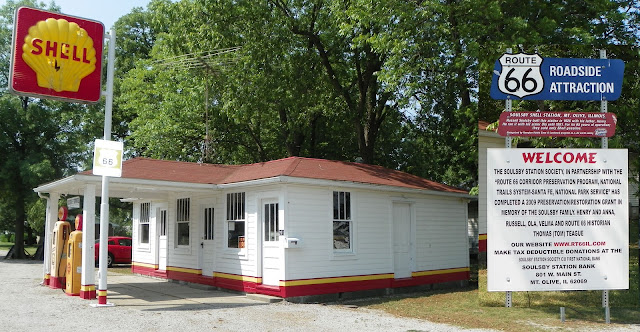 The town now maintains the property as a route 66 attraction. They sold shell gasoline for the run of the station. The white building with red any yellow trim really pops and the vintage pumps and signage round it out. Unlike many stops there are no additional items exhibited outdoors so it has more of real operational look to it. They had Some really swell T-shirts so we left the money in the donation jar and brought 1 home. The place was unattended at the time.

Across town we visited the cemetery monument of Mother Mary Jones. She was very involved with the labor movement, including the  Virden uprising we learned about yesterday. The granite monument spire includes a cameo of Mother Mary and she is flanked by two statues of miners A display case off to the side included mementos and some relevant graffiti. 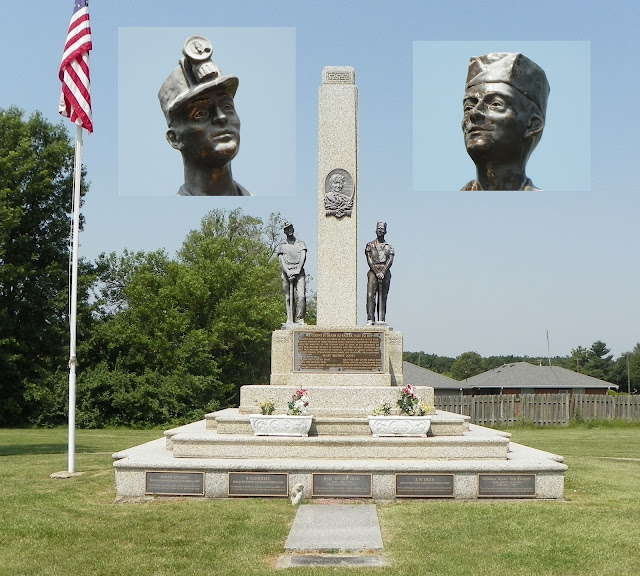 Collinsville greeted us with a nice water tower. I plan to add a water tower a day to this blog when I do the pictures. They are an art form down here. Wait till I write about what I can see from our motel door! The attraction that brought us to town is another water tower in the form of a giant Ketchup bottle. Built by the G.S. Suppiger Co. with the Brook’s brand it’s quite a sight. The company is now gone but local volunteers now maintain this piece of history. It’s in photo perfect pristine condition at this time. 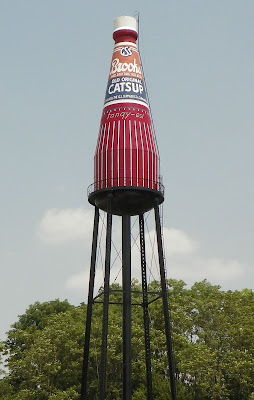 By now were past 1:00 PM and getting hungry. Down the road the next attraction was the Hen House Restaurant. It’s one of 5 remaining from a chain of 42. The food ranged from delicious to ordinary to unappealing. Some of this is personal tastes, neither one of is care for canned green beans sautete’d in bacon drippings. It was a cozy place with noteworthy poppy seed sally dressing and chicken fried steak. Service was good, the price great and the food did stick to our ribs. 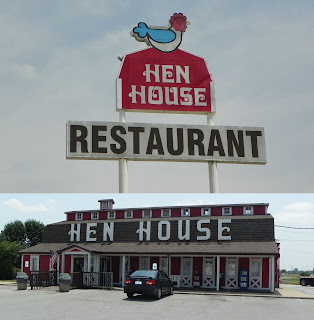 Next door was the remains of the BelAir drive in theater. All that remains is the sigh, on the marquee is a lone “S”. The land is for sale as the BelAir industrial estates.

Across town was the Greenway Motel. It’s a nice looking property with a significant roadside neon sign and L shaped motel building. If the timing had been different it may have been a candidate for a night’s stay.

Up the street the 1926 Luna Cafe was also flagged and a period site. The building has been updated but the signage evokes a prior age. Like most days we continue to spot buildings or signs that were probably from some heyday business. Some have been re purposed and others are in decay. This was the end of Illinois for us and with a crossing of the Mississippi River we were in Missouri.

Being Saturday afternoon of a holiday weekend resources were uncertain. The MO visitors welcome station got high marks as did the RT66 State Park. We made these the first priority. The attendant at the welcome station was a gem with lots of information on the route in the state and beyond, he too had made this journey! We left with maps that had his highlight marks all over them. Getting to the State park visitor center (highly recommended to us) today meant skipping past St.Louis by a few miles. The young man on duty wasn’t a font of information but did manage to sell us a really good guide book for the whole trip that we didn’t have. They had a nice route 66 exhibit of signage and artifacts. The states are slowly gearing up to maximize this route 66 fascination.

Armed with all this new information we decided to get a lock on a room in St.Louis and spend the evening working the town. We got a steady message that the town was booked for the night and we decided to shift gears. Thanks to our AAA guidebooks and cell phone we got a room booked west of the city and set about exploring the St. Louis route 66 essentials. We could have spent days here but that’s not the objective.

On our way east we visited the Giant Farmer statue in front of the Sappington Farmers Marker supermarket in St. Louis. Wearing blue coveralls and a red plaid shirt with his son by his side he waves to all. 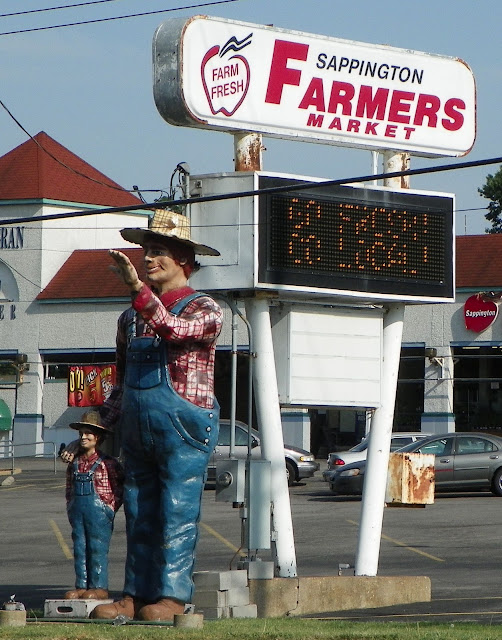 The next stop was a route 66 icon, Ted Drewes Frozen Custard Stand. Frozen custard. As I understand it is a soft serve ice cream with egg in the mix. 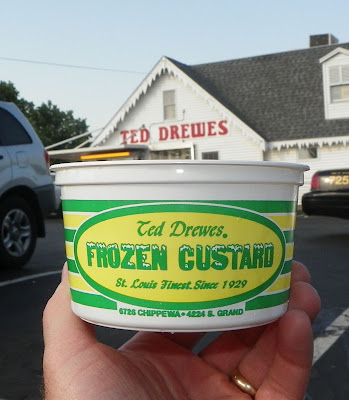 I had a Dutchman Concrete, vanilla with caramel sauce and pecans, small. There are sundaes and concretes and we learned that a concrete has had the toppings mixed into the custard, sort of like a DQ Blizzard but not quite as pulverized. The term concrete was found at future stops too. The stuff was delicious and silky smooth. Not firm or icy like common soft serve can be, it was really really good. A strategy that seems to be working is to always order small sizes and if it’s not really good, leave some behind. None was left behind here. Sometimes the story just tells itself and this place came through in spades. A bus pulled up and an entire wedding party piled out for a photo shoot and custard, it must have meant a lot to someone! 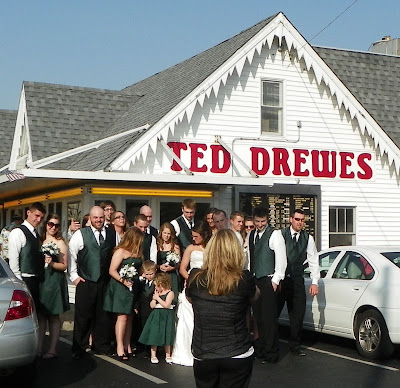 Another thing I have been doing at these iconic places is to ask someone that looks like a local if the place lives up to the legend. In this case the gal said “it’s the best, she grew up on it and still drives an hour to come get a treat”. Before she left she stopped by to confirm our satisfaction, she was right. Another T shirt is coming home.

Over the hill was another  route 66 institution, the Donut Drive-in. While I shot some pictures Lorna got a few donuts to go, glazed cake style.

She said the smell in there was amazing, one sniff in the Jeep with the 2 bagged donuts made me a believer. I’ll know more in the  morning. Open until 11:59 PM on Friday and Saturday nights they must have a munchies following. At about 6:00 PM the cases were well stocked. On the way back a “Ship it on the Frisco” lettered railroad overpass was worth stopping to take a few shots of.

Heading west to our motel we were traveling thorough Pacific and found the Cedar Inn Restaurant.  The cedar log chinked building dates back to the early 1930’s and had many celebrity guests over the decades. The place opened and closed a few times in the latter years, most recently opened in 1987, today it is closed but looks sound. The building signage is intact. 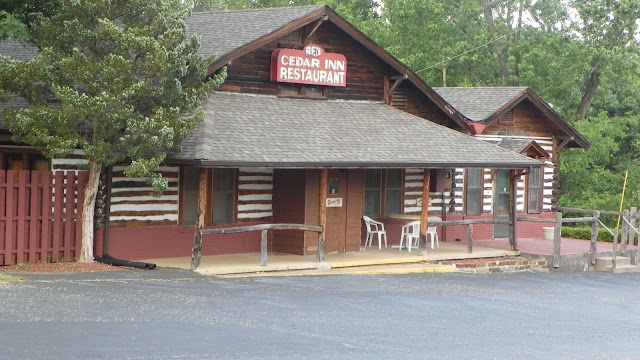 Up the road we noticed many railway bulk cars lined up on the siding. Soon we saw massive “caves”in the rock wall faces along the road. Huge cavernous chambers were carved in the hillside. Perhaps 50+ feet tall they went in to the edge of daylight. You could walk right in off the roadway! It turns out this is the site of a U.S. Silica mine supplying the glass industry, hence the rail cars. We left with a few small samples of the powdery rock. 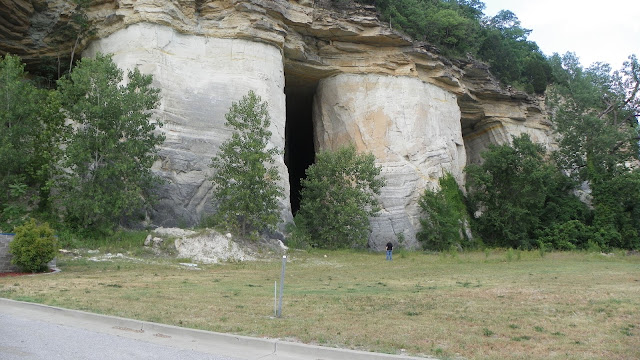 Farther up the road in Pacifica we found a massive roadside sign for the Diamond Restaurant and Gardenway Motel. 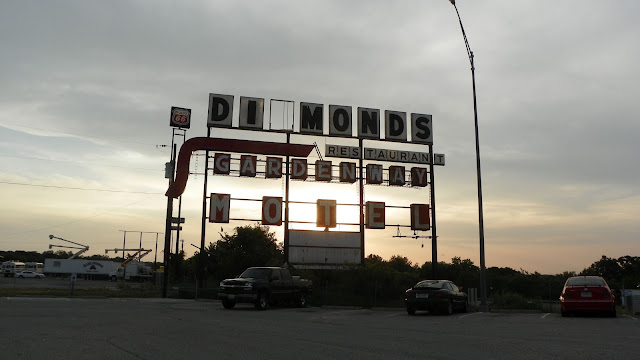 Despite some deterioration it’s still a grand sight and the western side took a good picture in the evening light. A smaller sight across the intersection catches the eye of nearby motorists. Up the road we found the Motel still in operation. It’s well worn but still hosting guests.

In Villa Ridge we found the Sunset Motel. This property had closed but went under restoration and appeared to be open, the vacancy sigh was lit. The V shaped building seems to form a common lawn area facing the road with access doors from the units. The drive-up entrances are on the back side.  Plenty of neon would be glowing shortly.

And with that we were soon at our motel. A nice tidy unit at the .Budget Lodging Motel in St. Clair. After a quick, light meal down the street we settled in for blogging and rest.

Writing this blog keeps my busy for an amazing 2-4 hours per night. This include setting up to download and back up the digital photos.  So far it has been pure joy, to sit back and process the days experiences, reviewing 100+ pictures a day, checking details in books and on the web and translating all of that into this journal.  The inexcusable act would be to reach the end of this journey without a record of how we got there.
Posted by Pete at 11:15 PM