We started our day in Marshfield and slept well despite the big overnight thunderstorm. It was almost 8:00 AM when we said, "what time is it?" Quick showers and it was off to the breakfast room. Speaking of showers, one thing I am noticing is the differences in water hardness. Today the water was pretty decent. At other locations the water is so hard you can’t tell if the soap has rinsed away. We hit the road under clear blue skies with the temperature climbing to the 90’s. As hot as it’s been it’s been comfortable enough. We stopped at a Walgreens to pick up some odds and ends. I ended this day missing the chance to say, ”last night I slept at a Holiday Inn”.
Next to the hotel there is a closed “American Drive-In” restaurant. It was neat with dining room murals I was able to shoot though the windows. I’m getting a knack for shielding the ambient light to limit window reflections. An interesting thing is that the place has no service counter. You either had carhop service out under the carport or you phoned you order in from your booth and were served and cashed out at your table. 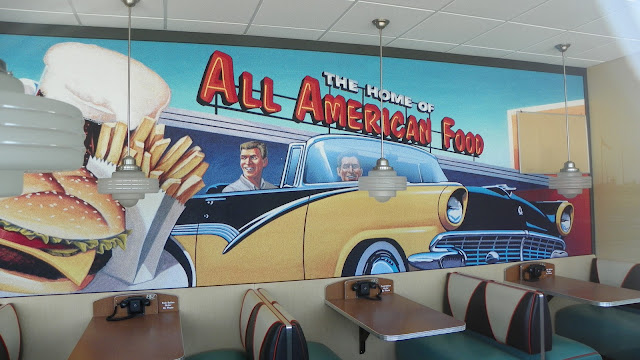 As we continued our tour we recognized this as a retired Sonic Drive-in restaurant. In these states Sonic is very prevalent. Frequently we would see them in very small towns where the golden arches were nowhere to be seen. We also came across several other retired last generation properties with a bright new Sonic just down the street.
Before long we were winding along a rural section of route 66. One thing I have started to notice as we move south is cement silos. Where most in the north have been steel they tend to be cement cylinders standing near bars down here. Hay is a big crop in these parts with lots and lots of round bales in the fields.
In Strafford I pulled off to get a shot of an American Motel billboard. Rooms were $29.95 and up. It was also a good place to try capturing what Lorna calls the peanut butter and jelly sandwich. Communities in these parts are often 10 miles or so apart. In most cases there is only one best where to get from point A to point B. Route 66 and the railway often run in parallel and in many cases the modern interstate is just a grassy strip away.  If 66 is in between the tracks and interstate we have a peanut butter and jelly sandwich. 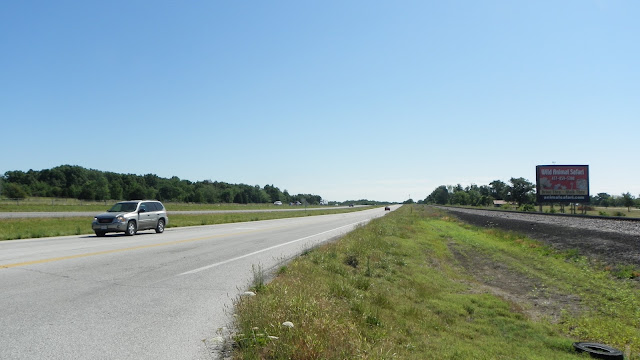 A little latter Lorna noticed a big bird on a barn roof. We turned around and the big black red headed hawk of a bird was perched on the peak drying his wings, still as a statue. I was able to snap some pictures of him and a friend getting wide and close-up shots. About the time we were thinking he was an ornament he pulled his wings in.

Sprinfields's  Holiday Drive-in theater was demolished in 2005 but the sign and marquee remain at the roadside. The parcel appears to remain undeveloped. 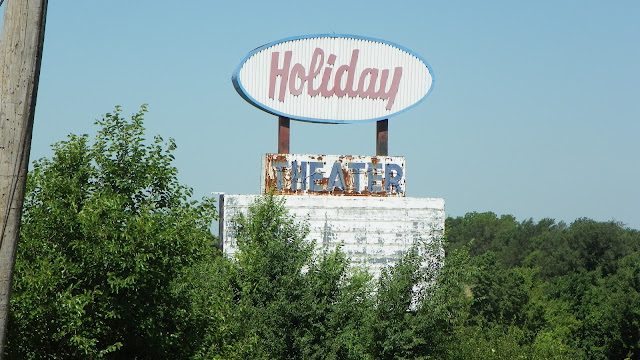 Springfield had a lot of cool stuff. We found the abandoned Lurvey's Motor Court, a collection of stone cabins next door to the Holiday Drive-in.  A cabbie taking a nap perked up to explain that it had been a resort at one time with cabins extending to the land where the drive-in had been built. Down across the field you can spot the building that had been the office. 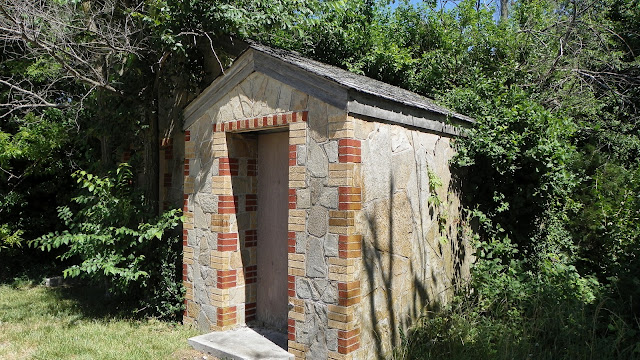 Cement construction was common (resists termites?) but it’s not much to look at. These and many many buildings are covered with local flat beige, brown, reddish stones with mortar joints. One term for the treatment is Ozark Giraffe. The result is a durable, attractive building. We see many that have burned or all of the wood has rotted away with rarely a crack in the masonry.

Another example across town is the still operating Rancho Court, still in operation. 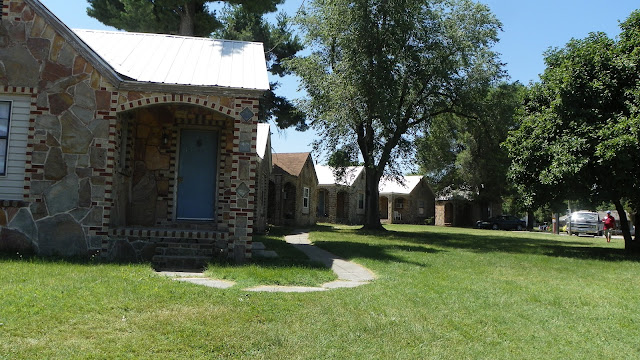 Around town we spotted quite a few vintage motels and cabins. One thing many have gone to is weekly and monthly rentals, no short stays. It’s probably a market these lower tier facilities can compete in and get a decent cash flow.

Right in the middle of a built- up shopping district a segment of 66 has been left alone as it rounds a bend in a parking lot! 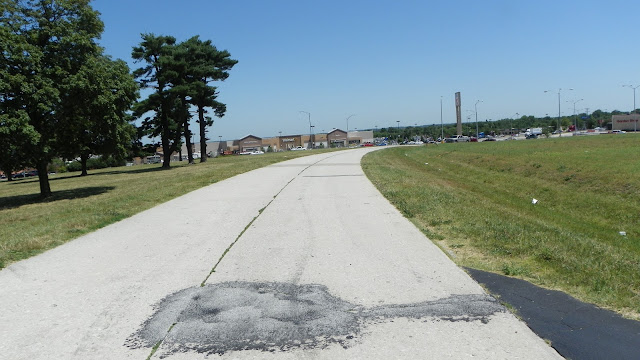 The road from Springfield heading to Carthage is mainly ghost towns. When I-40 opened up these communities dried up and in some cases no longer even exist as governed localities. 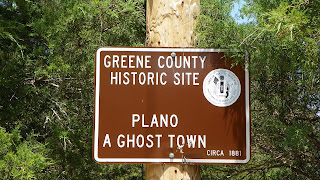 Driving down 66 (266) on the outskirts of Springfield in Bois D'Arc just east of state road T is an old Texaco sign and 2 pumps. Nothing else remains of the station. They are 3 digit pumps that probably never say fuel get past 99.9 cents. They are from a day when Keotane and Skeltane were Texaco trade names for fuels. 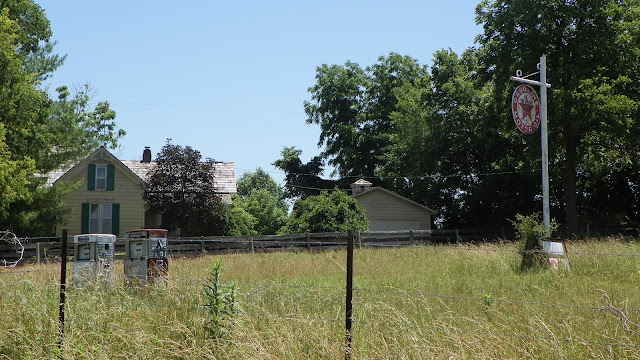 In Heartonville, a ghost town we spotted the stone structure of the 1936 D.L. Morris Garage. Somehow the picture escaped me, Ill need to dig into the back-ups. It’s only marking is a route 66 shield on the front wall. 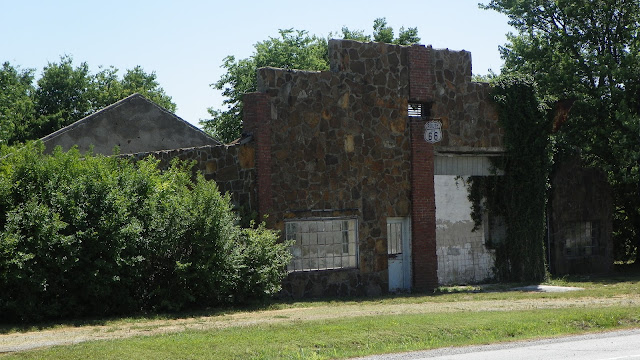 Plano another ghost town had signs of life at 1 intersection. A stone TYDOL gasoline station has been converted to a home. It looks to be inhabited. 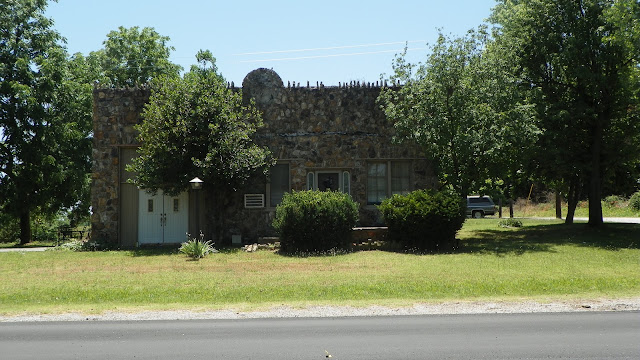 Diagonally across the intersection is  large castle like stone building (roof gone) that was formerly  a casket factory and at times a mortuary. Ivy covers a lot of the building and a large tree has grown inside. An 80 something year old man we spoke with latter said he played in the old structure as a kid. 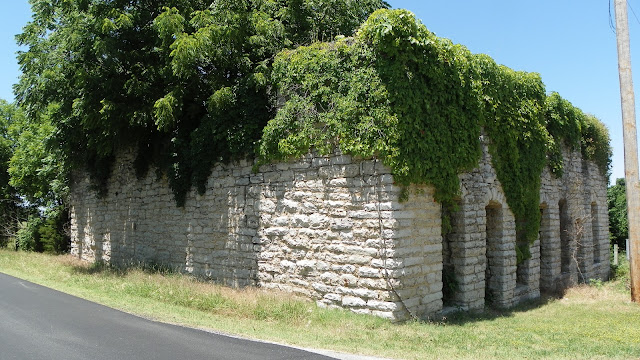 In Graystone Heights we came upon the remains of Modern Cabins. 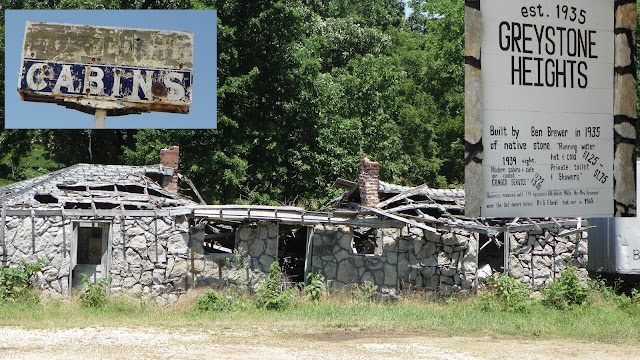 They were built in 1935 of stone construction. A silk flower company now operates from the property. the cabins deteriorating with the years. The owner took us into the office building that they still use. He pointed out the thick 8-12 inch walls built to make it a tornado refuge. A nice sign gives a lot of the history. It closed down in the early 1960’s when I-44 drew the traffic from the road. John the owner took time to pull out some books and show us what it looked like in its heyday. He also made sure we watched for his friend's Sinclair station down the road.
Before we could get to the Sinclair station we got to Halltown where we stopped in at the Whitehall Mercantile. An imposing 1900 building on the main drag (if you can call it that) specializing in used collectibles and merchandise of interest. Lorna got Lone Ranger and Hopalong Cassidy marbles and some pressed glass pieces for her collection. A hand written receipt on an old fashioned sales pad was prepared. Sooner or later we need to start shipping stuff home. We got to chat with Jerry White and his grandson. Jerry had founded the business with his wife Thelma. 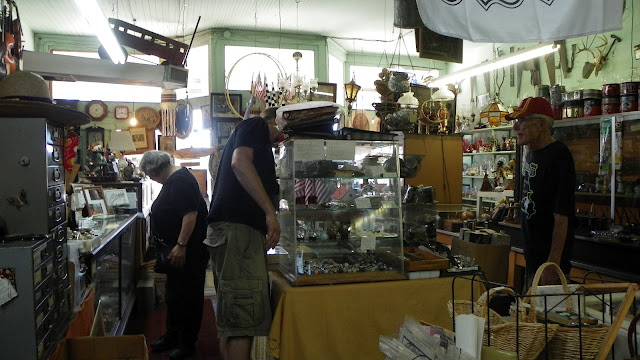 He gave us a round slab of red cedar to bring home and sand when we wanted to smell  something fresh, really nice guy! He said that traffic has really dropped off after 911. He told us there are more tourists on the road from overseas, Europe, Australia that the US. We got the same story down the road. The folks along this stretch of road are a delight to chat with and they seem happy to have people taking an interest.

Paris Springs or Gay Parita was our next stop. Here we visited Gary Turner at his recreated Sinclair station. 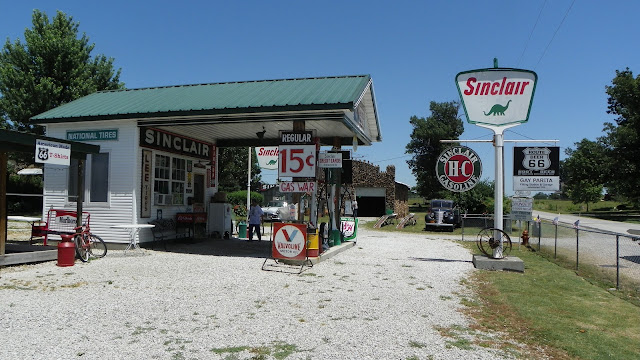 I bet we were there for well over an hour.  A flatbed wrecker had arrived with a black 1951 Nash Statesman Super that may be converted to look like a police car in with his other vintage vehicles. We went back and forth on where to put it he was fun to hang with. His wife was a real nice woman too. His garage is a nice old stone building from the 1920’s but the filling station had burnt when he arrived so he built a replica and went from there. 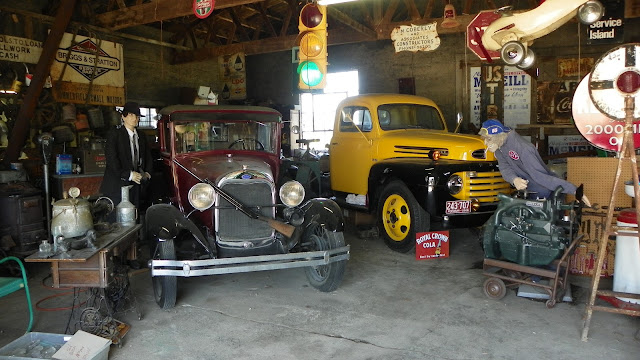 When we went to the garage he handed me 2 ice cold ROUTE 66 sodas. He said to save one to pour over ice cream tonight with my sweetie and to share the other for now with his complements. He has all sorts of vehicles, gas station paraphernalia, pumps signs and eye catching stuff. While we were there he sat down in in gas station office and sketched a map of some "must see" destinations down the road. Form the shelf behind him he passed a steady stream of business cards and brochures that were ours to take. Before we left he pulled out a route 66 flag and offered to take pictures of Lorna and me holding it as souvenirs, what a guy! 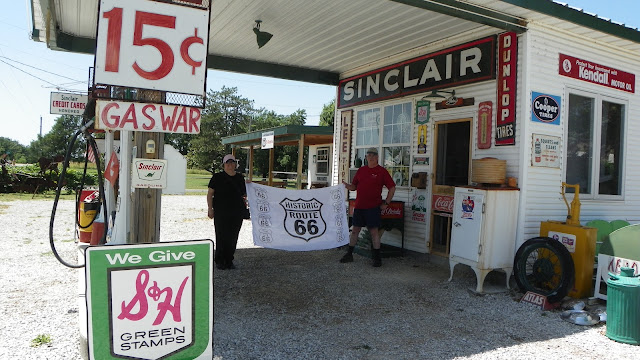 In Spencer (another ghost town) big things are happening. Francis Ryan and his wife of Kansas bought the remains of this rambling stone walled 1920’s enterprise. Things varied over the years but it held a store, filling station / garage, cafe, barber shop, feed store. 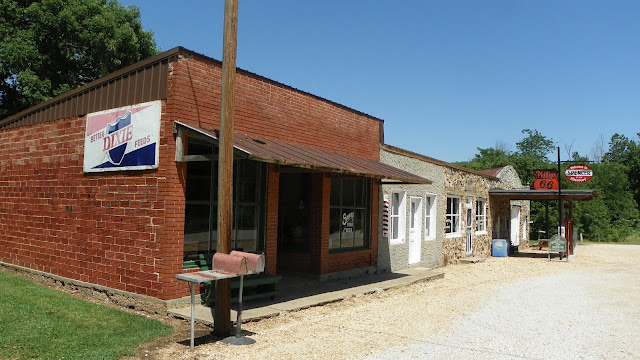 They have been at it for a few years and it’s starting to really look like something. The building is secure and period furniture and equipment is filling in. It is their weekend project! 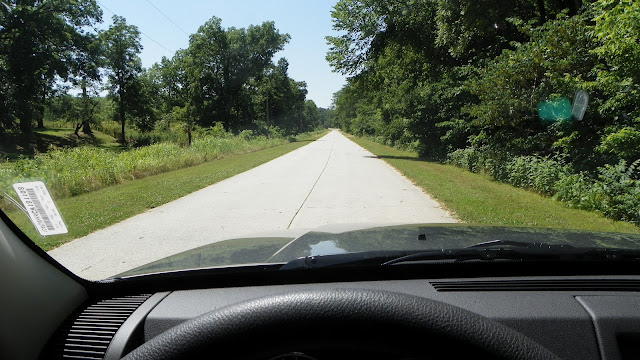 Just as we entered Carthage we got to a real oddity recommended by Gary Turner. He said that we have to visit Red Oak II. He said we’d see a sign for Red Oak on the highway but not to go there because it’s gone! Further down the highway we’d see another sign and to follow that. As it turns out a local artist, Lowell Davis hated to see his hometown of Red Oak change with time and he wanted his family together on his 10 acre Carthage corn field. Back in the 1980’s he set about moving the town, one building at a time into a lovely rustic community. He called the place Red Oak II Missoura. 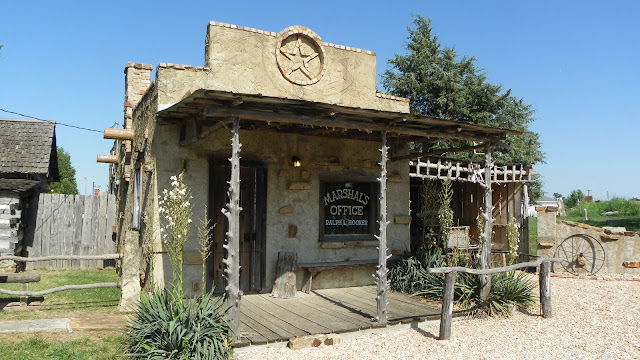 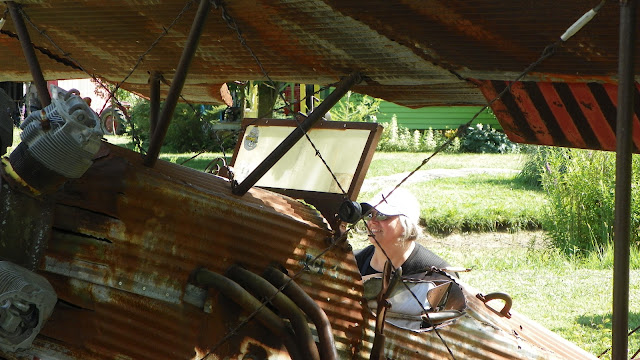 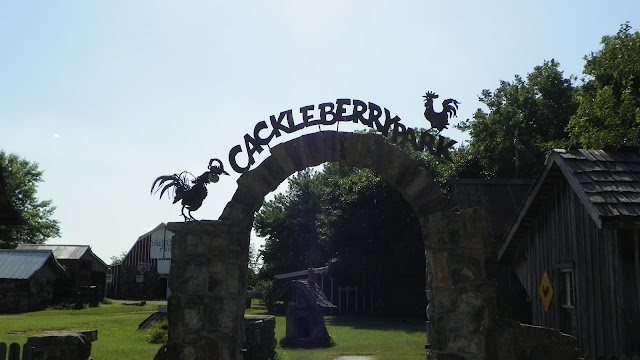 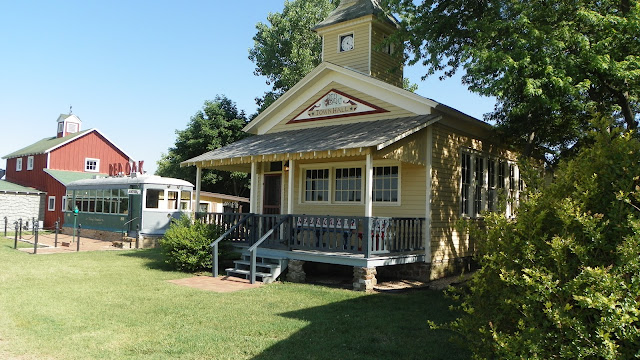 The property is peppered with his folk art making it an interesting hour’s stroll. Along the way he rescued other rout 66 buildings that became available. We got a book detailing the community, visits are on an honor system donation basis. There are some people residing in the homes. Most buildings are common commercial buildings that are open to the public. We saw no other guests during our visit. Pretty cool place, lots of photos!

Before going into Carthage for dinner we located the Crapduster. 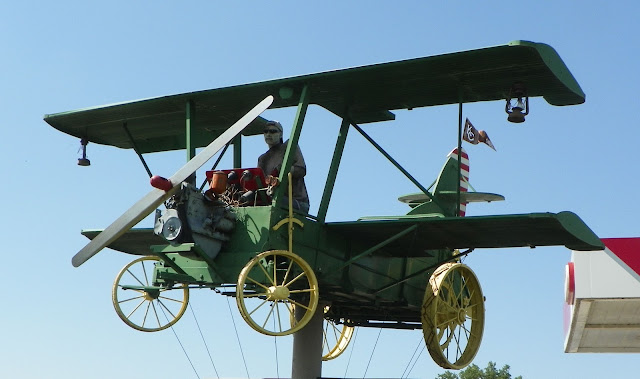 This is a manure spreader equipped with wings and all of the other features needed to make a plane including a pilot. It’s perched up on a post by the highway. Lowell Davis created this masterpiece in 1997. Go Missoura Kid!

This sent us to Carthage for “lunch” at about 6:00 PM. To be honest we snuck frozen custard in Springfield back near noon planning a “late lunch”. We stopped at the Pancake Hut and had a nice enough meal. Unfortunately the Chicago Coin Band Box is permanently on the blink. 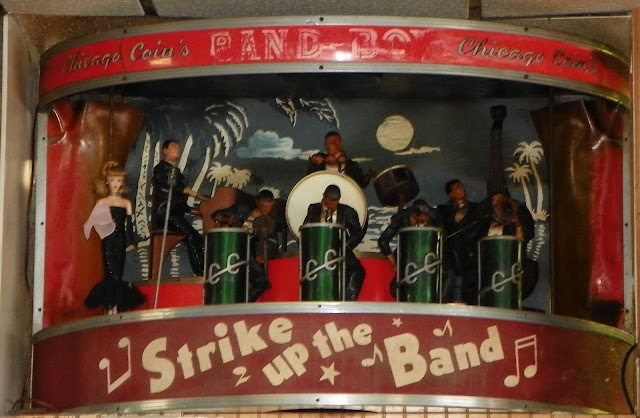 After dinner we toured the downtown where many stores are clustered around a massive stone county courthouse. Where route 66 enters town it’s a little rundown and the downtown was uncommonly quiet for such a place at 7:00 PM on a Tuesday. As we drove on we found the city to have some amazing old homes and vibrant modern business district on the far side of town. 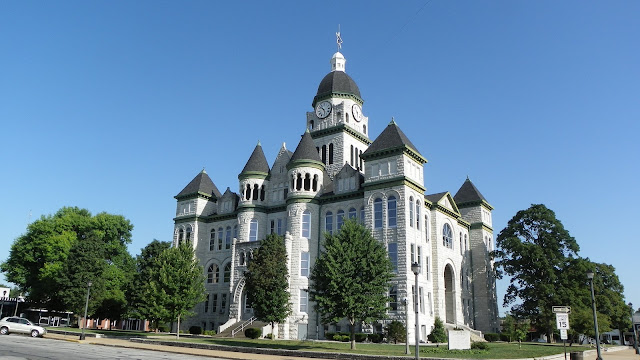 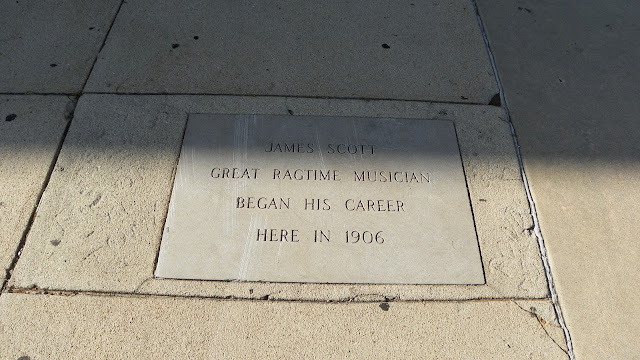 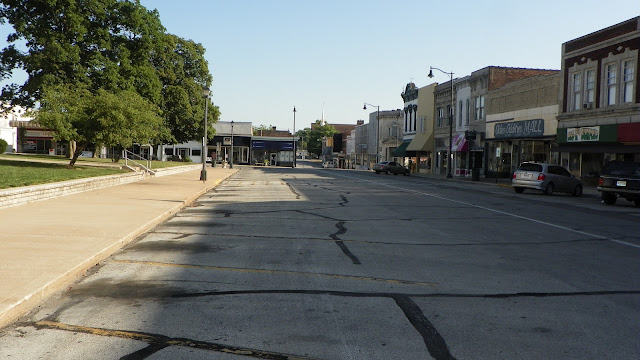 We settled into the Precious Moments Best Western, it’s the creators home town here in Carthage. Lorna did some Laundry and I got an early start on the blog. We’ve been just over 3 days in Missouri now but the state line is “in sight” and Kansas has a very short segment in the journey. I expect to next write from Oklahoma. The people have been engaging and very willing to share their stories. Writing this blog forces me to make sense of it all and that adds a whole other dimension to the trip. This is fun!