After being out for the show and up blogging we slept in a little today but By 10:30 or so we had checked out and headed off to get the real journey underway. Between the two of us juggling maps, guidebooks and the GPS we quickly learned that we’d need to stay on our toes. The GPS routes that I downloaded do not behave entirely as expected but it will take some more attention to fully understand them. Meanwhile we have plenty of good resources and it’s working well.

After 1 misstep that got us needlessly on the interstate we navigated our way back to the Mother Road and did well for the rest of the day. We did manage to catch the BEGIN sign of route 66 in Chicago, that was one I was really happy to nail. One cool moment as we drove away from the city was when I looked in the rearview mirror and saw a panoramic view of the Chicago skyline. 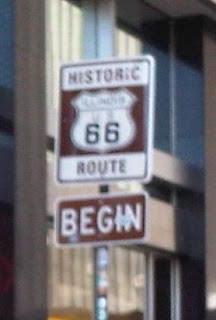 It wasn’t long before we saw unique city signs acknowledging Route 66 such as in Berwin. Breakfast was late but as 1:00 PM approached we were finding our appetites. Lorna realized that we were closing in on Dell Rhea Chicken Basket a Route 66 Roadside Attraction since 1966. It’s on a small section of remaining roadway that has essentially become a city street. Getting there meant getting off the interstate and on afterwards. As expected some segments no longer exist and sometimes you need to go a few exits to jump the gaps. We took the lunch buffet and sampled what was offered including the fried chicken. The breading was significant and very tasty. The breast I had was juicy and flavorful. The Italian meatloaf was also noteworthy. The place has been featured on Diners, Drive-ins and Dives. Business was brisk for being after the noon hour. The restaurant had a very vintage style, inside and out, Route 66 décor was evident. 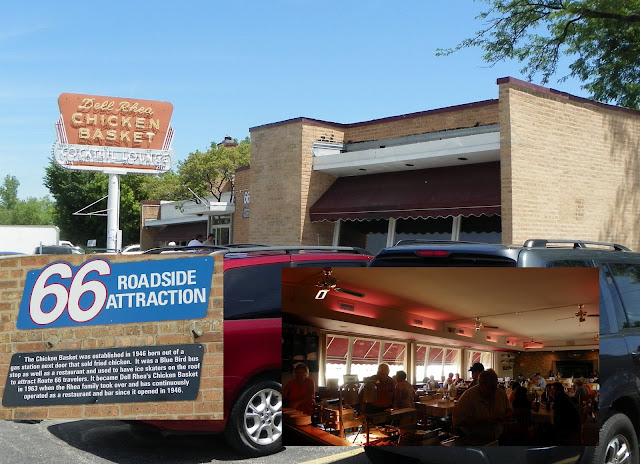 One curiosity that began building almost immediately was wondering how many others were making the same journey. I did hear some chatter that certainly suggested that we were not alone.

Joliet was the next stop. As we entered town there is a park that includes some informative signs and the Rich and Creamy ice cream stand. It sports a rooftop ice cream cone emblazoned with the town slogan, “Joliet Kicks on Route 66”. There were interpretive signs and the our first vintage gas pump. Just as we have had local lighthouse and bear trails they have these vintage fuel pumps. We stopped at the Visitors Center and got more guide pamphlets. Then we hit the Rialto Square Theater which has become a concert / performing arts type of theater. Kathy Griffin was there Sunday, Trace Adkins comes in July. The outside is a grand stone structure. The last stop was the Old Joliet Prison, complete with one of those gas pumps. The prison is an intricate stone structure with high walls, observation turrets all prisoner quarried of local limestone. The facility has been closed. 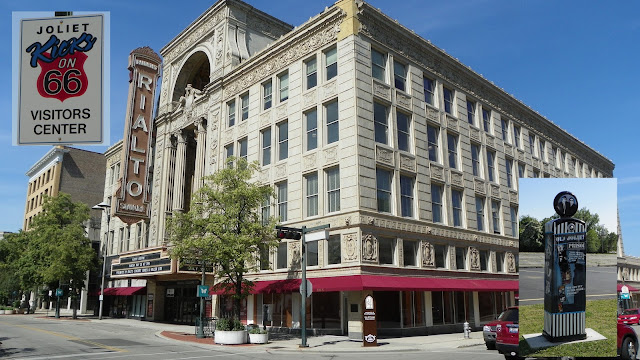 We headed down the road into Wilmington we reached the Launching Pad Restaurant, home of the Gemini Giant, a tall (20+”) green metal astronaut holding a small rocket. The restaurant is for sale and nobody was there as after 4:00. Some of these towns seemed painfully quiet and they seem to have been hit hard by the economy. A small sign asked that after stopping for pictures to please come inside to help support the giant. 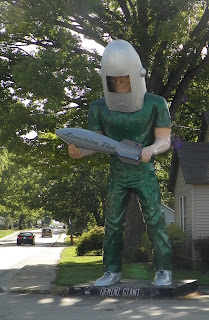 In Braidwood we did stop for a snack at the Polka Dot Drive-in, established 1956. The building had a small traditional carport awning in the front and was surrounded with iconic statues. Marylin, Fabian, Elvis, Betty Boop, the Blues Brothers, you get the picture. They served a mix of drive in food and ice cream. The place was tidy and doing a steady business. I sampled the “World Famous Chili  Cheese Fries”. I think Lorna made the better choice with her frappe. 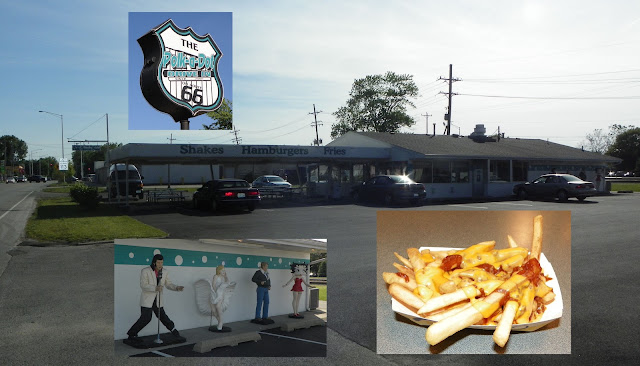 This was all fine and good but the first place that got my heart was Gardner. Route 66 diverts from the long straight away and meanders thought this little village. The land is flat, the kids playing on the playgrounds and it really had that Middle America small town feel. Driving into the village we came upon our first Route 66 shield painted down on the pavement. The 2 room jail, a vintage rail dining car and a tribute to a local minister that helped avert nuclear catastrophe were some of the stories the village held. 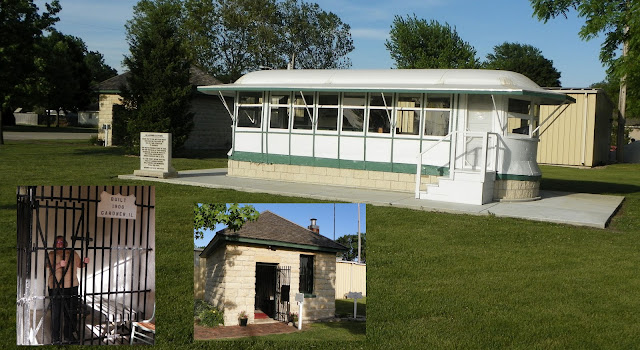 Back on the straight and narrow of 66 we traveled south realizing that rooms were not on every corner. The next town, Dwight held promise. We rolled into town and snagged a room at the Classic Inn, a well worn but clean motel. After 2 nights in Chicago it will help balance the lodging budget. After unloading it was time to go find dinner with a few suggestions from the desk clerk.

A sign for a historic windmill caught our eye and soon the windmill did too. After meandering through the neighborhood we were there. A few photos’ , read the descriptive signs and  off we went. We circled up to the main village but nothing there caught our eye. 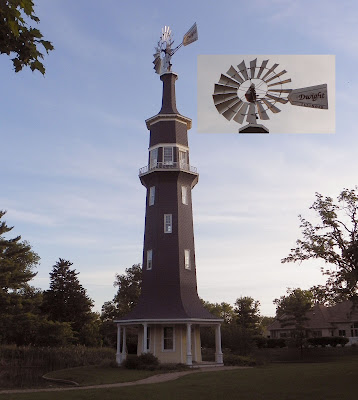 As we circled out of the village looking for food we stumbled on the restored Ambler-Decker Texaco station, now a landmark stop. Built in 1933 it was the longest operating fuel station on Route 66. Complete with a porta-a-pottie and picnic tables, it was a welcoming attraction. Inside are a number of vintage items on display but we won’t be around when they open. 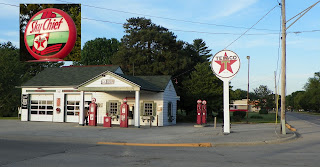 And there, across the intersection was dinner, The Old Route 66 Family Restaurant. A simple, home style BLT hit the spot and it was back to our room to catch up on things. 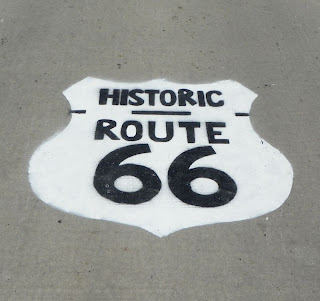