A Double Shot of Bourbon

We awoke in St. Clair, MO and started our day. The hotel breakfast was a light one but it served the purposes and matched the room rate. The room was very nice with a view of the interstate and St. Clair’s solution to having enough water for the showers. 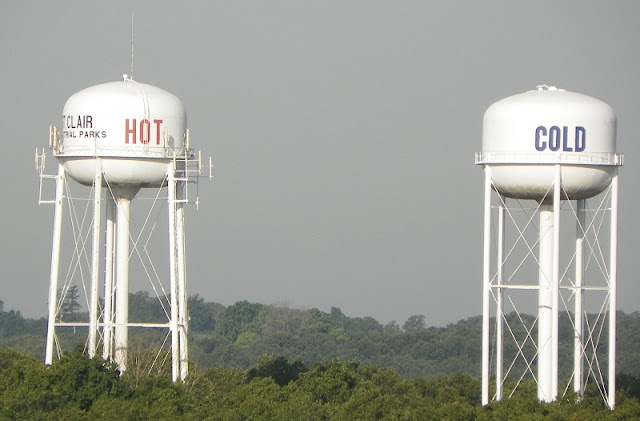 The first stop of the day was a tour of Meremec Caverns in Stanton MO. It’s a few miles off of the road but it has been drawing travelers for decades. We started to see billboards for this place well up in Illinois and as you get closer the intensity builds. You can just about picture the road weary kids in the backseat clamoring to stop. 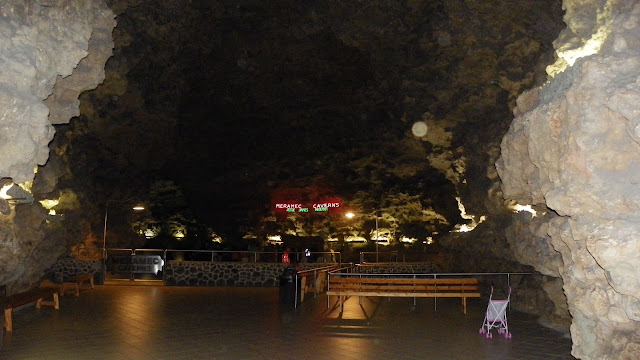 The walking tour though the caverns ran almost an hour and a half and was pretty cool. 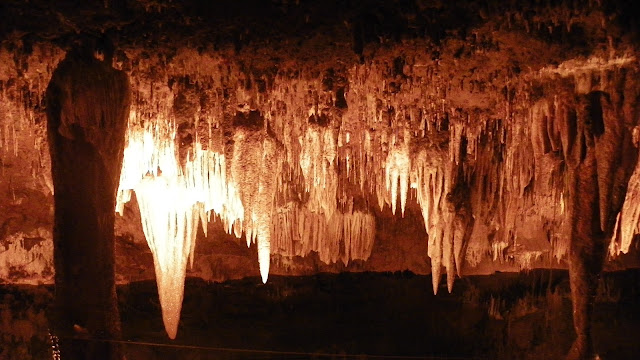 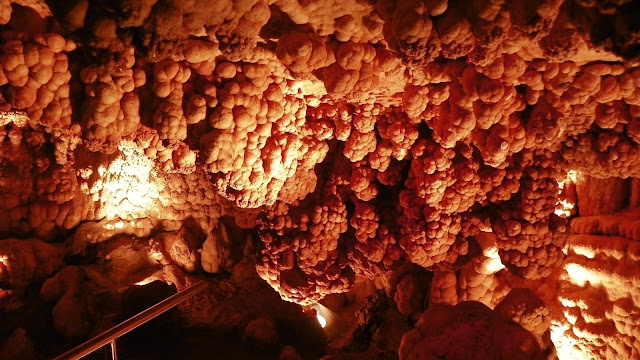 It ended in a chamber called the Theater where a wall is draped in stalactites. God Bless America by Kate Smith (At one time she had performed it there live) was played as a light show illuminated the formations, it was pretty neat. 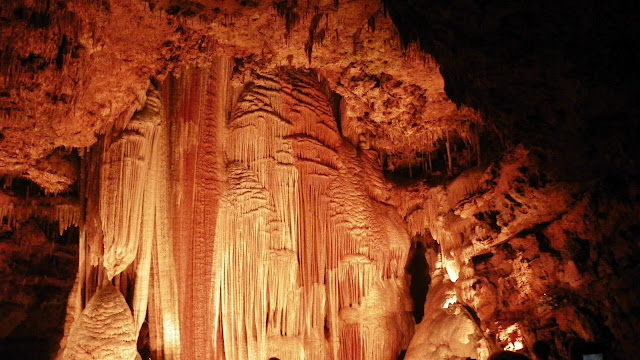 The cool cave was a nice respite from the 90F+ day outdoors. They had one of those paper roll ,player pianos that I enjoy. I made my 25 cents worth of music to liven the place up, kids flocked to this thing.  With arrival, waiting, the tour, gift shop and a light lunch it was about a 3 hour stop.
On our way out the next stop was the the Reptile Ranch a supposed roadside attraction of animals and  oddities. We went in, looked around and it didn’t pass the sniff test. That was enough to say "let’s move on". I’m now reading that it had closed at some point and someone has apparently taken another swing at making it work.
Right where the road to the caverns meets route 66 is the Jesse James Wax Museum. It turns out the the founder of Meremec Caverns had what I’ll call an obsession with Jesse. On the tour they showed us a chamber where Jesse supposedly stayed to avoid the law. 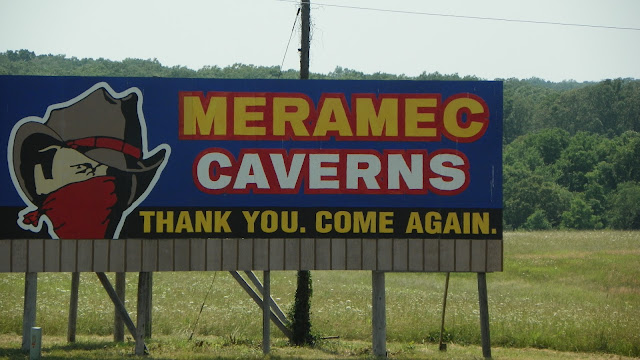 The museum starts with a movie that lays out this guys belief that he located Jesse, alive and well at a ripe old age. He has video with an elderly Jesse and even interviews Jesse’s equally old cook. The wax museum did have some nice vignette displays that bring the story to life. For $7 it was good fun and we even got the book that tells the whole story in full detail. Roadside fun!

Next door is a presently closed (For Sale) antique toy museum. Also within eye shot were two old motels. One, the Stanton Motel was occupied and may have had paying guests. The other property signed only as MOTEL was dormant. The $26.95 and up banner lashed to the front suggested it had been open in the near past.
Bourbon was our next stop. Noteworthy are the town water towers emblazoned with the town name suggesting liquor in mass quantity. I was able to get a picture that included 2 towers in legible alignment, a double shot of bourbon. 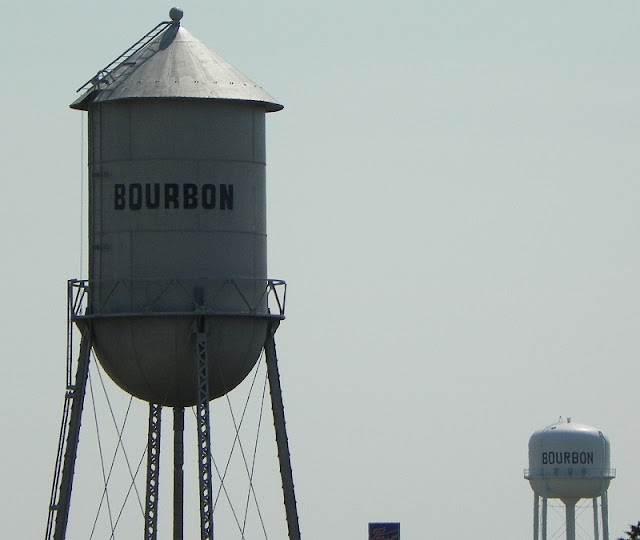 Down the road was the Circle Inn Malt shop restaurant. As I was roaming around taking pictures a local woman came out and struck up a conversation, we talked Maine, Missouri, the restaurant and other stuff. 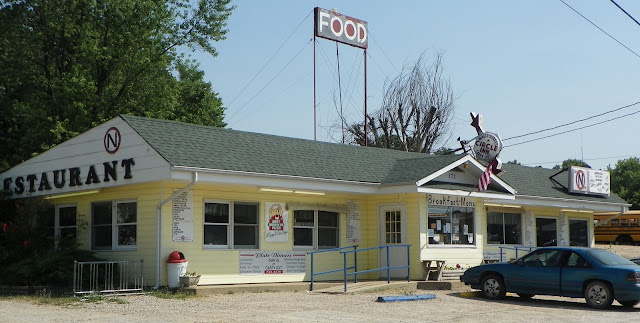 We were still due for desert so we went in for malts, I had peanut butter, Lorna cherry. They were pretty good with a real malt taste and texture. They had some nice route 66 murals in one dining room that were worth capturing. Down the road  further we found the (Route 66) Road House restaurant, steaks, pasta and BBQ Ribs. The place was dormant but signs suggested recent operation and that it may have a future at some point.
We finally stumbled on a WalMart and got a decent cooler and  more camera batteries. Some simple things are not as plentiful as I’d expect, maybe were just traveling in the slow lane.
After 4:30PM we rolled into Cuba where there the downtown is home to 12 historical murals. On the way in we first found the Wagon Wheel Motel, a classic route 66 motel. 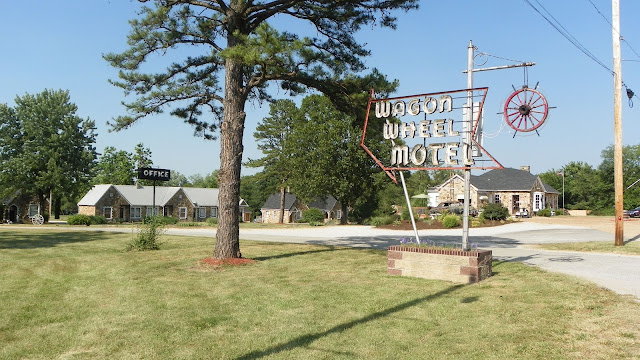 The stone building contain 6 or so rooms each and are on a nice property. I was snapping pictures and Lorna went in to chat with the office/gift shop lady. By the time I wandered in the history lesson was in progress. Apparently the original proprietor was retiring and the place had become run down. Some woman purchased it and set to restore the place. It’s been very nicely done with clean tasteful modern touches without losing the vintage charm. The buildings were renovated in succession so they could remain in operation. It is the longest continually operating lodging establishment on route 66 and she didn’t want to lose that distinction. After buying a history book of the place and a few trinkets we left. Once outside we decided to see if we could stay the night. We wanted to start getting off the road earlier to allow earlier starts, the murals were just up the street and the Missouri Hick BBQ restaurant next door seemed like a happening place. We snagged a room and called it home. 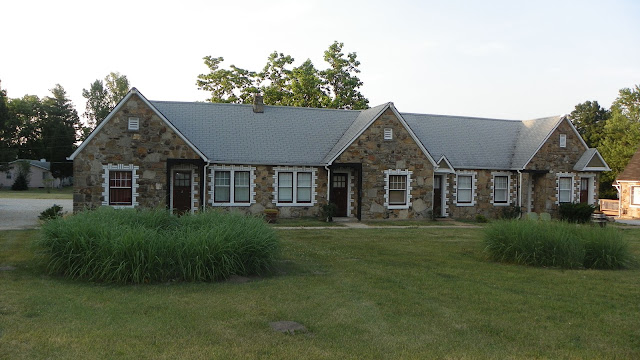 We headed into town and spent close to 2 hours walking and snapping photos of the  murals and other interesting stuff. Being Sunday of a holiday afternoon the place was pretty quiet wit hardly anything open. Thank God for digital photography. One mural depicting the towns actual 6 Gold Star Sons from WW2 was especially poignant.

Next stop was the Misssouri Hick BBQ next door. We each had a combo platter of St. Louis style ribs and BBQ smoked turkey. The ribs were sender and meaty, not fatty and all. The turkey was flavorful and juicy, not even wanting BBQ sauce. Each table had six different barbecue sauces in squeeze bottles. The variety was fun to play around with. 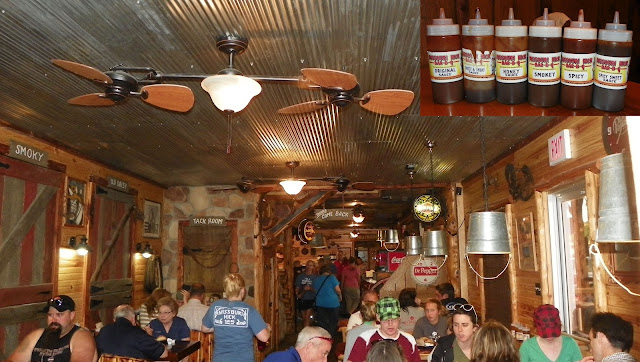 He wait staff was scrambling and the dining room and take-out were doing a good business. The pace as decorated with lots of vintage stuff but it was bright and tasteful, it didn't feel like you were eating in a flea market. 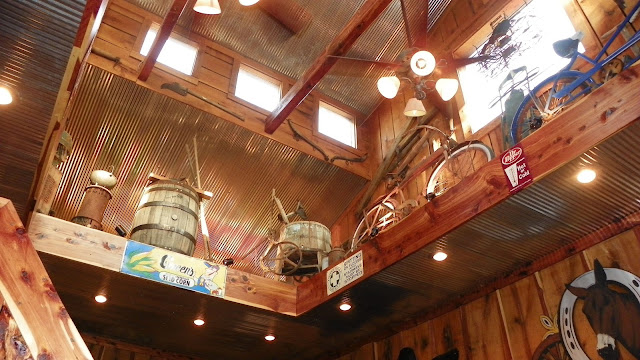 Afterwards we settled into our room. At dusk I looked out to the road to see that the neon sign was functional and it was. After dark I drove out to the shoulder of the roadway to use the hood as a camera rest and messed around with some still and video shots. I got some that are at least good enough to remember the place by.
With that it was time to blog and call it a night. Smoking is not as banned down here as it is back home. Restaurants sometimes have smoking sections and the place will have that forgotten odor. The Motel and at least the downstairs of the BBQ joint were smoke free. :) We have at least another day to go in MO. It's hard to say how the holiday will impact things. It would be fun to catch a Midwest small town Memorial Day observance.
Posted by Pete at 9:34 PM